Yesterday, I received a comment on my menu planning for the week post about what I feed my dogs leading up to a tournament and during the tournament. So I thought it would be a perfect post for Tasty Tuesday. It may not be a treat recipe, but my dogs sure enjoy their "breakfasts" so why not?

First off, I raw feed. More than that, I try to do prey model raw feeding. This basically means taking a bunch of random, easily available parts of various animals and piecing them together in a way that would mimic the diet my dogs would have if given whole raw prey. But, I don't have the space or desire to have a full deer sit in my yard while my dogs eat off of it, hence the prey model "franken-prey" style feeding.

The basic requirements I follow for my dogs are 80% muscle meat, 10% edible bone, 5% liver, 5% other organs. This isn't a daily weighing of each piece, it is an average I try to achieve over time. And, I adjust it based on my dogs own needs. Edible bone helps keep stools solid, so if my guys have soft or mushy stools, they get more bone for a few days. Overall, they probably get closer to 20% bone just for stool management, which is fine. Organs, especially liver, can create soft stools, so those meals are often fed between two bone-heavy meals. But, I never feed bones without meat attached. Meat should always be the basis of a raw diet. 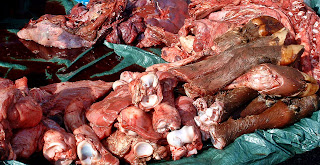 Anyway, back to the specifics leading up to a tournament.

I have two main focuses leading up to a flyball tournament: That my dogs receive enough food to provide them with the energy they need to compete to the fullest extent; That my dogs have firm, formed stools that reduce the likelihood of diarrhea at a tournament, or even worse, in the ring.

So, first in achieving the second of my goals: I feed no organ meats in the week leading up to the tournament. They get organ meats in the week before that, and the week after, and since I strive for a balance over time, it does no harm to them to leave out the organs for a week. My dogs also get plenty of bone in this week, though being careful not to feed enough bone to create "fossil poops" which are hard, crumbly, and white, indicating too much calcium. For the first of my goals, I generally feed my dogs extra starting 2 days before a tournament. Not a lot, not enough to create problems, but a bit of extra.

So, with that in mind, this is my dog's meal plan for this week:

This is a slightly more bone-heavy week than I normally would feed. I don't take the glucosamine supplements with us when we travel unless we will be gone for more than a week, as it needs to stay in the fridge. It is more for joint support in active athletes than anything else, and missing a few days here and there won't hurt them at all. Chicken is the easiest and cheapest edible meat-and-bone to feed. Beef roast was on sale recently, and beef heart is normally cheaper than any other red meat (that is, meat from mammals, including pork). I don't feed pork leading up to tournaments because it can sometimes cause loose stools in my dogs.

During a tournament, I make sure to feed the dogs early so they are not carrying around a huge amount of undigested food while racing. I feed them in the morning at home, and it would cause more problems to switch them to night time feedings for tournaments than it is worth. I do bring along chicken or beef jerky (that I make myself to avoid additions like preservatives) and feed that a little bit at a time throughout the day, including in water if I need to encourage the dogs to drink more. This gives them a bit more energy without causing stool or stomach issues.


Human treat:
The human treat I made yesterday won't be ready for another month. But, I might as well share it now. Blackberry liquor (for those of legal drinking age only please) is super tasty. (No dogs should ever drink alcohol, no matter how much they seem to want to.)

Method:
Put 1 cup of blackberries each into a mason jar (I used two jars, you can put it all in one large jar if you want though). In a Pyrex measuring cup, place sugar, add boiling water, then stir until sugar is dissolved. Pour half of the sugar water into each mason jar over the blackberries. Fill the rest of the space in the jar with vodka (or everclear, if you want a stronger solution at the end). Put lids on jars, place jars in a dark, cool area. Once every few days, take out the jar and turn it over. Leave it sealed for at least a month.

After a month, strain out the berries from the alcohol. Put the liquid back in a glass jar (you can use a decorative jar to make it pretty). Some people discard the berries at this point, but you can also use them in any number of recipes, or as a simple ice cream topping.

For a variation, you can use brandy instead of vodka to make a unique flavored brandy. Make sure you like brandy though, first.