For the month of November, we were pleased to review one of Chewy.com's non-food items. We received a Benebone in exchange for our honest review. 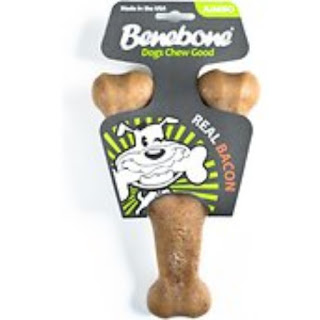 The Benebone is a durable chew toy for dogs. They are not edible but are highly interesting for dogs. Koira was really excited when I pulled it out of the package for her. She has been happily chewing on it all month.

Koira is a power chewer, but not an intentional destroyer like some dogs. She chews and has fun chewing, but she doesn't seem to set out to destroy the thing she is chewing on. Kongs last forever with her- I've never had her even take a chunk out of one. So with that in mind, I would say that the Benebone is a great chew toy for a dog like Koira who loves to chew but not destroy.

The Benebone has visible marks from her chewing, but isn't significantly damaged. I would absolutely recommend supervising your dog while they chew this, especially the first few times, to make sure they aren't deliberately taking pieces off of it to swallow. A determined dog likely could take chunks off if they wanted to. But most dogs aren't going to try, and Koira greatly enjoys this toy without any sign of issue.

Unfortunately I was lazy and unable to get some good pictures of Koira enjoying her Benebone this month, and now being the last day of the month, I wanted to make sure I got my review up. So you'll just have to take my word for it that Koira really enjoys this chew toy, and that we would be happy purchasing another one of these in the future. If you are interested, Chewy.com currently has the Benebone on sale (regularly $16.99, now $11.49 for the regular size).
3 comments:

Koira sleeping in her kennel, having evicted the cat (or well, waited for the cat to leave on her own, but who's keeping track?).

For some reason, Martha has taken to laying in Koira's kennel. I even swapped out beds to see if it was the bed she liked, but no, she insists on hanging out in the kennel. Koira has a healthy respect for cat claws, so goes ahead and lets Martha steal her space and bed.

Email ThisBlogThis!Share to TwitterShare to FacebookShare to Pinterest
Labels: Caturday

Phone pictures from the beach in Neskowin, OR. It was too wet to risk my camera on the beach!

Yesterday, I met some friends at the beach near Lincoln City. The rain swept in around noon, so after grabbing some lunch at a cute little cafe (with the most delicious chanterelle mushroom soup I've ever had), my friends took off to head back to Portland. I took Koira for a short run down on the beach, and decided to stop by Drift Creek Falls on the way home. I've been meaning to make a trip out there to hike down to the falls for ages, and I wasn't going to miss it when I was less than 10 miles away.

In Oregon, when you go hiking in the fall, you expect it to be muddy and wet, even if it isn't currently raining. On the coast, chances are good it will be raining, or so foggy it may as well be raining.

Drift Creek Falls is no exception to this. The trailhead is near the top of Cougar Mountain in a National Park. Koira hiked on leash and was only off leash when I was actively taking her picture, hence the harness she is wearing in all of them.


It was raining when I got to the trailhead, and only rained harder the longer we were there. I tucked my camera into the front of my zipped up rain jacket and only took it out for really quick snaps a handful of times on the hike down to the falls.


Koira was happy to be out and moving after spending most of the morning in the car while I played on the beach with my friends and their dogs. She is getting over kennel cough, so isn't allowed to interact with other dogs. But she has been done coughing for about a week, so thankfully is finally able to get out and do stuff without hacking the entire time. We're just going to keep avoiding dogs for a while longer so we don't risk spreading the KC.


The entire hike down to Drift Creek Falls is only three miles round trip, so it doesn't seem like it would be a hard hike. And the trail is really well maintained. But since you go down for 1.5 miles, then turn around and walk back uphill at the end, the trail always seems harder than it really is. And it didn't help that I'd already been running around on the beach all morning.


This trail is just so beautiful every time I go, I am not sure why it always takes me so long to get back there again. It has been years since my last visit, and we were certainly overdue for one. Probably part of it is that it takes me a while to forget how terrifying the long, narrow suspension bridge over the falls is. I actually had to go back after starting across it the first time, because I looked down and started getting vertigo. We tried again though and made it across, which means, of course, that I had to cross it on the way back to get back to the car.


Koira wasn't a big fan of the bridge either, though I think she didn't like the sound of the falls more than the bridge itself. The falls are partly hidden when you first start across the bridge, making them pretty quiet, then all of a sudden they come into view and get really loud.


I didn't take any pictures on the bridge, because that would have required that we stop on the bridge, which just wasn't going to happen. I was busy talking myself into keeping going and reminding myself to not look down and to not think about bridges breaking, or earthquakes, or anything like that.


Ultimately though the bridge is worth it to get to go down and see the falls, and it has nice sturdy railings on either side to give you something to hold onto. We were running kind of late in the day by the time we started our hike, so we just went quickly down to the falls, grabbed a few pictures, and then headed back up to the car to drive home.


I had to grab a couple pictures of my hiking gear, because it is so typical of what many Oregonians wear. Lightweight rain jacket (not visible) with matching waterproof pants (because not having waterproof pants isn't really an option), and a pair of Vibrams, which aren't waterproof, but you are never going to keep your feet dry anyway, so why bother trying.

Oh, and of course, the essential hiking companion, a loyal dog.


Overall my day ended up being almost 24,000 steps, and the equivalent of 83 flights of stairs, according to my FitBit. And my legs are telling me about it! Probably a little over half of the steps were with Koira, and most of the stairs. I'm hoping she isn't as sore as I am. We do lots of walking, but not too many hills on a regular basis.


Overall, I know I had a great day, and I am pretty sure Koira would agree. She wasn't a huge fan of the rain, especially as it got worse toward the end of our hike, but I think she enjoyed herself anyway.

I saw this adorable pink argyle fabric at the store, and just had to get it and make Koira a cute sweater for the upcoming cold weather. I still need to borrow a serger to finish the inside seams, but I think it turned out really nice overall.