This month, we had the pleasure of reviewing Muse canned cat food from Chewy.com. Now, I think it is pretty obvious that my cat is something of a food hound. He eats out of food toys much of the time, and always gets his food carefully measured out because he gorges himself until he is sick if left to his own devices.

That said, he is still a cat, and cats are picky in some of the strangest ways. He doesn't like a lot of treats that I give the dogs, for instance. He will eat the dog kibble, but only certain kinds. He likes his kind of cat kibble, but after a few days, he loses interest in most other kinds (with a few exceptions which end up added into his food rotation). 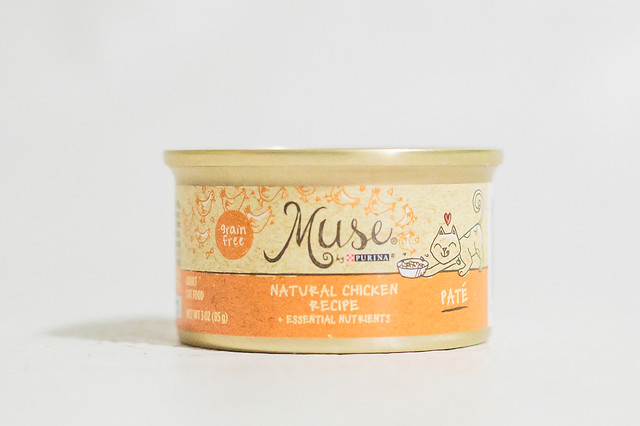 Muse is a grain free wet food by Purina. We tried the Chicken recipe in a paté. With wet cat foods, I've found that the texture is as important as the flavor. Paté tends to be well received here, while chunks or shreds in gravy more often just have the gravy licked off the pieces. Though, again, this isn't always true, depending on the food. 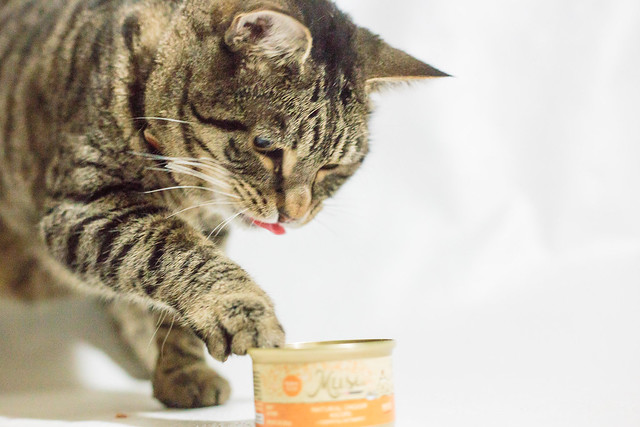 Theodore liked the smell of this food enough that he was pretty offended when I tried to get a picture of him with the can, and pulled it toward himself with a paw. 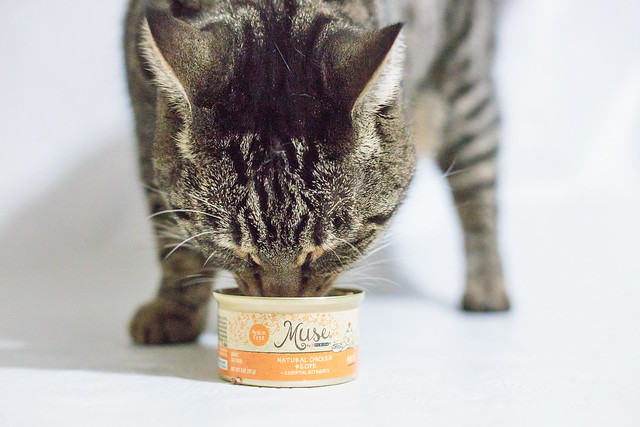 He settled down to eat, and gave me dirty looks if I adjusted the can to get the label facing forward, or move him back to a better spot of light. 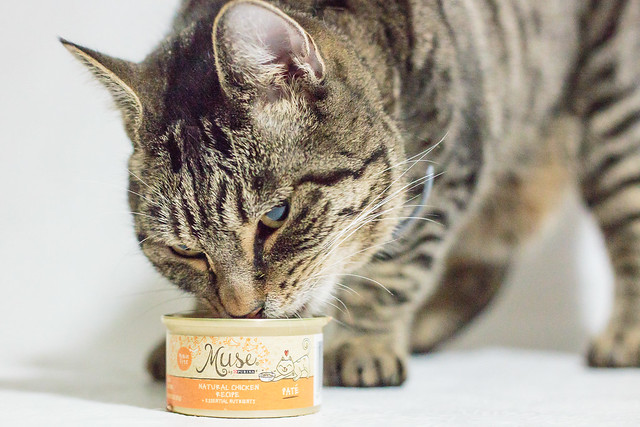 Overall, I would say that this food was a hit with him. He seemed to enjoy both the flavor and the texture, and he licked up every bit (well, other than that inevitable bit around the edges on the bottom that every cat I have ever had leaves around the bottom of a bowl regardless of the food). The ingredient list (Ingredients: Chicken, Chicken Broth, Ocean Whitefish, Liver, Spinach, Sweet Potatoes, Blueberry Pomace, Potassium Chloride, Guar Gum, Choline Chloride, Taurine, Salt, Mono and Dicalcium Phosphate, Thiamine Mononitrate, Vitamin E Supplement, Zinc Sulfate, Ferrous Sulfate, Niacin, Calcium Pantothenate, Vitamin A Supplement, Copper Sulfate, Menadione Sodium Bisulfite Complex (Source of Vitamin K Activity), Manganese Sulfate, Pyridoxine Hyrochloride, Riboflavin Supplement, Vitamin B-12 Supplement, Biotin, Folic Acid, Vitamin D-3 Supplement, Potassium Iodide) makes me comfortable feeding this as a supplement to dry kibble, or as a stand alone meal.

Currently, it is on sale for $22.98 for a 24 can case, which is less than a dollar per can. At 1 can per 3-3 1/2 lbs, that is more than I would want to spend as a standalone food (though the Salmon flavor is on sale for $14.22 right now). But as one meal of the day, or as a treat. I would be fine with it, and I feel that cats tend to not drink enough water when on a kibble only diet, and benefit greatly from wet food. And for cats who are more dehydrated, it is easy to mix in even more water to make a mushy soup.

We were provided with these treats in exchange for our honest review. We were not compensated in any other way, and all opinions expressed are entirely our own.
No comments:

Chewy.com sent us some Wellness Soft Wellbites to try out this month. And I thought the best demo of how well the dogs liked these treats would be a few pictures of the things they will do for them.


Ptera has been learning how to sit pretty, and we've been working on her duration. She is still having trouble holding it long enough for me to back up, focus, and snap a picture, but she sure tried hard for a Wellbite.

I had Koira pose with her Tuffy bull (his name is Bevo) without letting her play with it, because it was a Christmas present and we were snapping photos before I wrapped it. Self restraint is hard. She also had never before been asked to pose with one foot up on an object like this. She tried hard, and she ended up getting the idea after only a few tries.


Then of course, there is Ptera just making sure I get a good posed picture of her.


And Koira showing off her "wave" trick. She was happy to wave as many times as I asked as long as the treats kept coming.


A few notes from the humans about these treats. They are larger than I feed without breaking up, but are super soft and easy to break up as small as you want. I normally break them into 4-6 pieces, and sometimes even smaller for Ptera or if I am running low on treats. Even when I accidentally left the bag open over night, the treats stayed soft enough to break easily. I've ended up with plenty of other softer treats ending up rock hard after forgetting to close the bag up after grabbing a handful (I know, I know, I could just close the bag, and yet...) so I really appreciated that aspect of these. At $7.99 per bag right now they are pretty reasonable and comparable to other training treats.

We were provided with these treats in exchange for our honest review. We were not compensated in any other way, and all opinions expressed are entirely our own.
No comments:

One Day Until Christmas

WW: Another Tournament, Another Title

This past weekend, I headed up to the Canadian border once again for flyball, though this time, I stayed on the US side of the border. 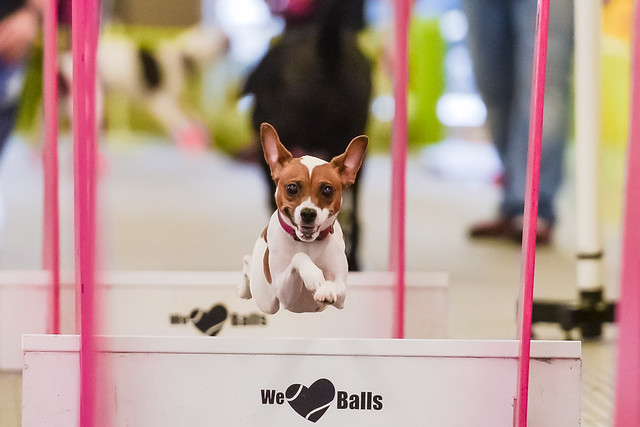 Once again, Ptera ran awesome, and I couldn't possibly be more proud of her. 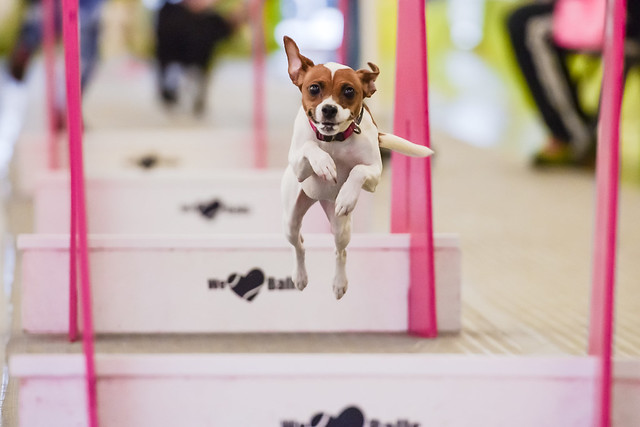 Once again, Ptera came home with another 500+ points, and raked in a new title. 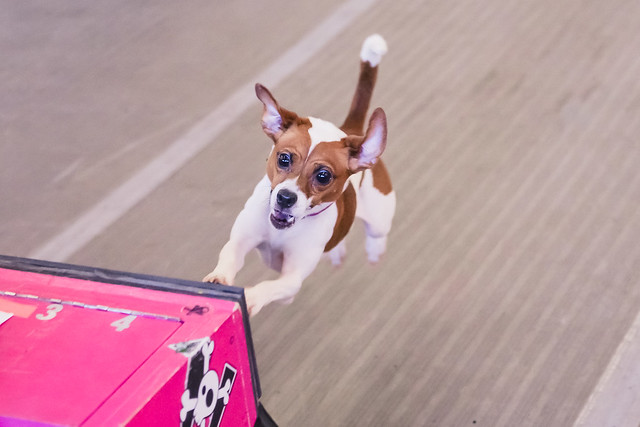 Photos are by Squirrel Patrol Photography, who was one of three photographers at the tournament this past weekend (I was also one of those three). I am so happy he got some awesome pictures of Ptera running.
3 comments:

I recently had an opportunity to try out Petcurean's new line of food, Gather. 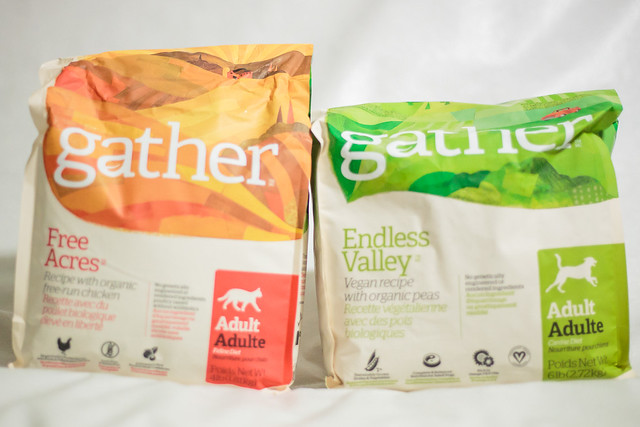 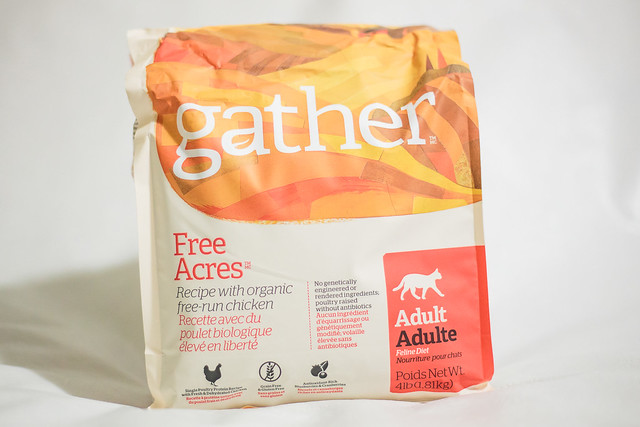 The cat food that we tried was the chicken flavor, and uses organic, free range chicken. It is also completely grain free.


Theodore got pretty excited when he heard food hit his bowl. This is his first try of the food. I can safely say that he was a fan. He is a bit of a food hound, for a cat, but can be a bit picky when it comes to kibble foods.


The kibble pieces in this cat food are teeny tiny, and are flat. Theo actually ended up having a little bit of trouble eating the last few kibbles in his bowl each time because of the shape. The flat pieces seemed to stick to the bottom of the bowl a bit. But that didn't phase him at all.


Even after over a week of eating Gather cat food, Theo was still a fan, and still quickly cleaned his bowl (except for the couple of pieces that got stuck to the spit on the bottom of the bowl, anyway). I think time really is the test for cats and food, because they have to eat it long enough for the novelty to wear off, at least a few meals.

I was really happy with him on this food.

The dog food that we tried was actually the vegan flavor of Gather, called Endless Valley.

Anyone who has followed my blog for long knows that I have fed raw for years, both alone, and as a part of a rotational diet. So that part of me is somewhat opposed to a vegan dog food. However, I can see a distinct need for something like this. Years ago, while trying to figure out Koira's allergies, I put her on a number of different foods, trying to figure out what she was allergic to. This food would be a great option for that. It would eliminate all animal proteins, and give something to feed regularly while the allergy situation is figured out, slowly adding back in different ingredients.


It has just the slightest green tinge, but otherwise, without reading the bag, I don't think anyone would know this was vegan. I tried it out with about 10 different dogs as treats, and not one dog refused it, even with a few dogs being pretty picky.

With this food being from a great company like Petcurean, I have to believe that it is the best possible option if, for some reason, your dog has to be on a vegan diet for allergies. That said, I do have an issue with humans forcing their pets to eat vegan just because of idealogical nonsense. 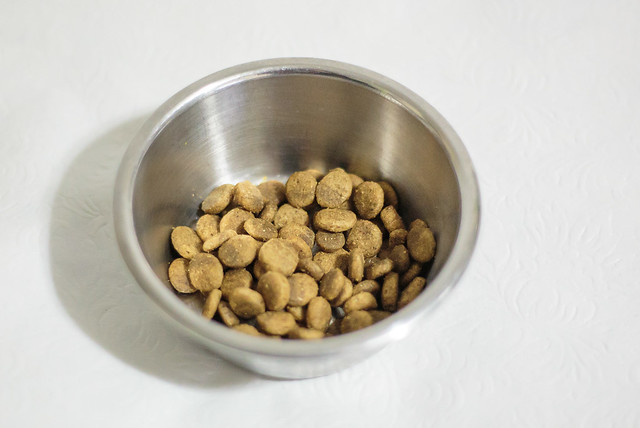 Overall, I was happy with both of these foods. I likely wouldn't feed the Gather Endless Valley vegan food for long, simply because there is no reason to with my dogs. But I like knowing that it is out there, because I know how hard it can be to do elimination diets with dogs while getting them the right nutrition the entire time.


Do your dogs have snow coats? Did you make them, or buy them? If you bought them, what brand, and are you happy with the fit? I end up making jackets, because Koira's fat head, wide shoulders, and narrow waist mean commercial gear just doesn't fit right. And Ptera has super narrow shoulders but is long and tall, so things that fit her shoulders are like belly shirts, and things that fit length-wise slide down her shoulders and tangle up her front legs.
3 comments:

Black and White Sunday: In a Tree

A benefit of having a tiny dog, you can use them like Christmas tree ornaments.