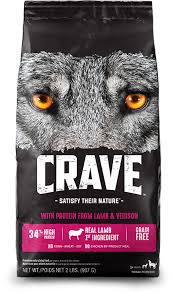 This month, we chose to review Crave dog food from Chewy.com. The formula we chose was Lamb and Venison. We received this food for free in exchange for our honest review, and were not compensated in any other way.

The ingredient list is so-so. The first ingredient is lamb, followed by chicken meal. Venison meal isn't actually on the list until after chickpeas, split peas, potato protein, and alfalfa meal, so I am not too confident about how much actual venison is in this food in relation to the other proteins. That said, there is both deboned lamb and lamb meal in addition to the chicken meal, and no by-products are listed.

Both Ptera and Koira really liked this food. The kibbles are flat and round, larger than I like for doing training with Ptera, but still relatively small.

Overall, I am happy to feed this food, but it probably will not be making it into our regular rotation of food. However, I wouldn't hesitate to feed it again if it was on sale for a great price (currently just over $40 for a 22 lb bag, which isn't horrible but also not awesome for price in my opinion).
No comments: 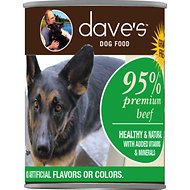 Canned food isn't something my dogs get a ton of. With no medical issues requiring it, Ptera tends to eat kibble most of the time, while Koira eats raw most of the time. That doesn't mean I don't like using canned foods sometimes, though. I always like to keep a few cans on hand for emergencies like dental issues or hiding medicines. This month, I had the opportunity to review Dave's dog food, a brand that I have actually never tried or heard of before (we were not compensated in any other way and all opinions are entirely our own). I decided to try the 95% beef option.

Leading up to the flyball tournament earlier this month, I actually put Koira on a diet of this canned food plus Crave kibble every other day, alternating with raw elk meat. I like having her on a kibble food when we travel since it is so much easier, but I feel like she does better on raw food, so this was the compromise. She ran great at the tournament, so I think it worked fine.

I've also been using this food to stuff Kongs for Ptera when I leave for work in the morning. I've been crazy busy this month (hence falling off the face of the internet for most of the month), which means Ptera hasn't been doing as much as she should be. I reduced her kibble from 1/2 cup twice a day to 1/3 cup twice a day, fed in a Kong Wobbler. Then, I added a kong stuffed with Dave's 95% beef canned food and a little kibble, frozen. The Kong Wobbler for actual meals and the stuffed kong for a snack give Ptera something to do with her brain while I am gone for the day and help keep her behaving herself. She seems to really like the food in the kong, as they are always licked clean when I get home. She used to ignore them when I left her with stuffed kongs, so I don't know if she just really likes this food or if she is learning to enjoy food toys without me.

I am super happy to feed this food. It is a normal pate texture, but doesn't smell super gross when you open the can, and it stuffs well without being too messy. The ingredients are pretty basic and boring, just enough extra added minerals and vitamins that you know it is a balanced food. I would much rather stuff a kong with this than with peanut butter! I would be happy to continue using this food in the future.
No comments:

I skipped the July update of our hiking goals for the year. We didn't actually go hiking at all in July. I know. Pretty bad, considering we have so few dry months here.

In July, I did make it out on the paddleboard and kayak a few times. I went to a small, local lake with my mom a few times.

I also went camping at the coast for a few days with a friend and her family. We took out the paddleboard and some kayaks to Beaver Creek on the coast. I mostly stuck to the SUP, but did take a spin in the kayak. We camped at South Beach State Park, which was a lot of fun, but I didn't get a single photo of our campsite (we were in yurts) or of the beach. Or of the beach at Pacific City when we went there at the end of the week.

The first week of August, I slammed my week full of water trips. I started with a trip to Olalla lake with a friend who has never kayaked. I helped her put a big, super fun check mark on her bucket list, and had the opportunity myself to get out and have a great time.

The next day, I headed down to a reservoir near Eugene with a friend, where we spent a very smokey day out on the water. The Willamette Valley has been in smoke almost all summer, it feels like, from wildfires in Oregon, Washington, and even some smoke coming all the way from the big BC wildfires.

Then, I headed to the Silverton lake the next day to meet up with another friend and enjoy yet another day on the water. I was exhausted, but it was an amazingly fun week. It wasn't quite planned to be like that, rather, I made plans with three people and kept forgetting that I had plans. But somehow it all worked out, and I had an awesome week.


I went whitewater rafting with our flyball team boxloader and his friends/family, which was pretty awesome. I got exactly zero photos, and didn't have a dog with me, and didn't know anyone except the one person, but it was an absolute blast. So much fun.

I also had a chance to hit the beach once in August, even though I rarely do the beach in Oregon in the summer.

And went back to an old favorite hike, Drift Creek Falls. There was actually a tree down across the road and a few people had parked and hiked in the last mile to the trailhead. But, with teamwork between three carloads of people, we managed to move the tree out of the road with zero tools. That kind of eclipsed the hike, to be honest. It felt awesome to come together with a team of strangers and get something done that would have been impossible alone.

I just love the suspension bridge at Drift Creek Falls. It scares me, but I have been slowly tackling my fear of heights (remember that I went ziplining in the Redwoods in California?). This is a solid bridge in good condition, but narrow enough with open looking sides to be scary, but with chainlink and solid boards, so you can use it to conquer fears.

What have you been doing in the great outdoors this summer? Any fun plans before summer ends? I'm hoping to get some more hiking in this month, and at least a few more SUP trips as well.