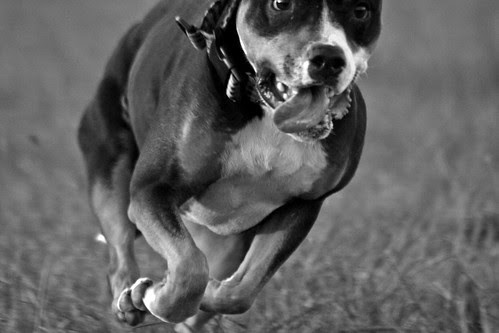 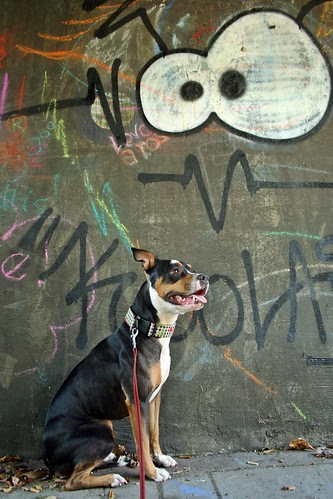 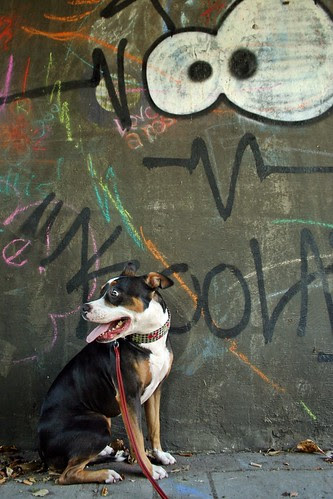 Is someone watching me? 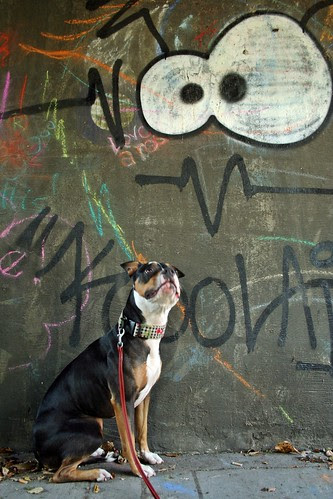 We're off to Washington for a weekend of flyball. Updates when we get home!
4 comments: 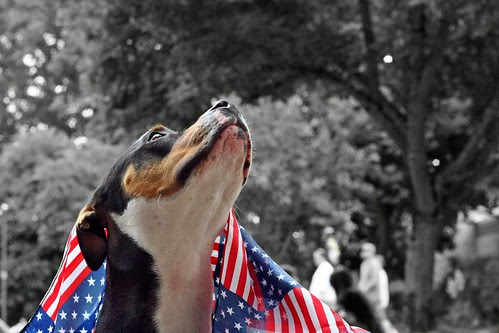 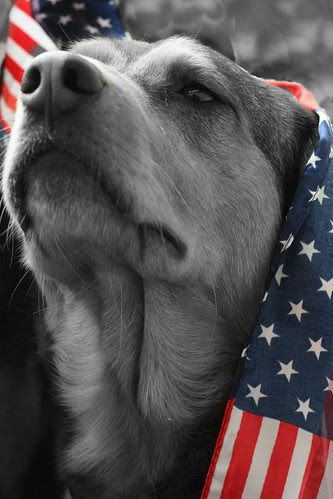 Here is a video of Koira's box turns at flyball practice this week.

I wanted to reply to the first comment here, so others would be able to see my response.

First, yes, this is a big improvement over her turn this time last year. In fact, this upcoming tournament next weekend is the last tournament Koira ran in, afterwhich I pulled her from competition to retrain her box turn. At this point, there are things I would like to see better about her turn (her rear higher, no double hitting with her front feet). However, I would be perfectly happy if she kept this turn for the rest of her career in flyball, as long as it stuck once we start fading the props. The problem is, I don't think it will. Her rear is already pretty low, and I think that once we start fading the props, her rear is going to drop even more, and she will try to go back to a slam-and-grab where her back feet never come close to the box.

For the striding, its a little different. Generally, for most dogs in flyball, you want them to have three strides in and three strides out (between jump and box and jump). Dogs are faster on the ground than in the air, so when a dog takes two strides instead of three, they are losing time. Additionally, if a dog takes only two strides off the box, they often are launching themselves for the jump early, causing stretched out jumping, and increasing the risk of them slamming into one of the jumps. That said, it isn't something I am too worried about with Koira. I may see if a stride bump gives us three strides, and if that will stick, but to be honest, my main focus will be on getting her turn to remain high and tight, even when we start fading the props.

This entire year is one of the many reasons you should always be careful to train your dog right the first way, in anything. It takes way more time to retrain a proper behavior than it does to train the right behavior in the first place. Many people would probably have given up on changing Koira's turn and just let her run with it. I think she hits the box way too hard to make that a safe choice (though for a dog who doesn't run as fast or hit as hard, it would be something I would consider).
5 comments: 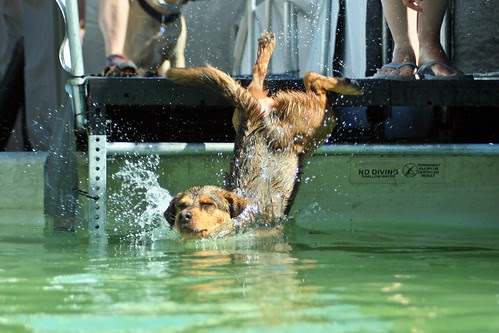 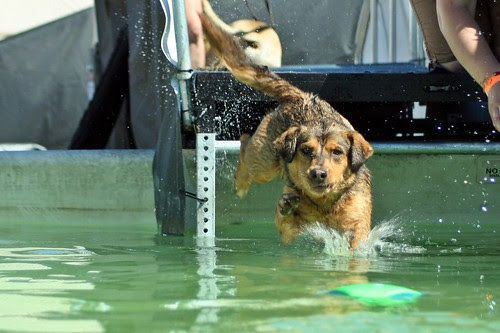 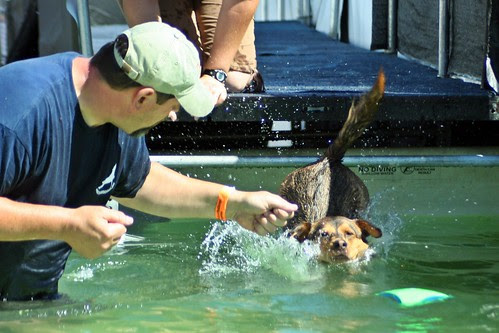 
Me and Koira headed out to our very first dock diving competition this week. Koira loves dock diving more than any other sport we compete in. When we first arrived, she was hot and still shaking from the car ride up to the State Fair where the competition was being held. As soon as she heard the first splash when a dog hit the water, though, she turned into a crazy desperate beast who wanted to dock dive, and wanted to dock dive NOW. 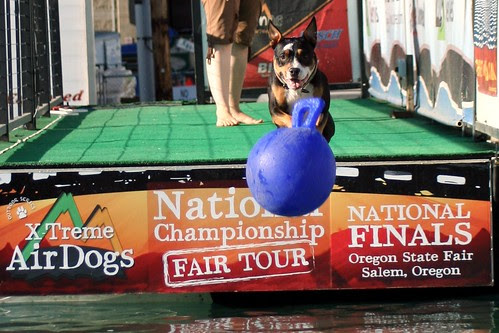 It is so much fun to compete in a sport you know your dog loves. Pallo loves flyball and both dogs really enjoy lure coursing (and for that matter, Koira has a lot of fun at flyball too), but Koira really REALLY loves dock diving.

When competing with the Northwest Challenge X-Treme AirDogs in the championship fair tour, the goal is fun. But, there is of course a set of rules about it. Basically, dogs jump in one of four divisions, divided up by the distance they jump. Novice is 0-10 feet, Amateur is 10-15 feet, Semi-pro is 15-20, and Pro is 20+ feet. So, you are better served with a dog who jumps 9.5 feet than one who jumps 10.2 feet, since one will likely win the Novice division while the other will probably come in last in Amateur. 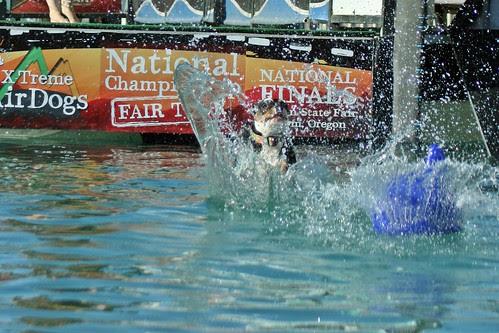 Koira's distances have been as bad as 10.5 and as good as 12.6 in her jumps so far. A lot of her jumping distance has to do with my throws, though. Also, she had a bit of a time adapting to jumping into a clear pool instead of a murky pond or river, which is where we have practiced. I spent a lot of time on the dock and the practice dock with her (I doubt I can really tire her out too much to jump!), and each jump she hesitated less and less at the end of the dock- she just had to realize it was the same thing here, even if the water is clear! Overall, I think she has done really good. I am hoping to go back again before the end of the series on Monday and see if we can't nail a really awesome jump.


Since the Northwest Challenge is a series of competitions done at fairs around the state, a lot of what is involved is geared toward wowing the audience. The competition waves are narrated by someone on a microphone, announcing the competitors, distances jumped, and general information. In addition to the competition waves, though, a number of demonstrations and exhibitions are put on as crowd entertainment.

We would never jump two dogs at once during competition, but during an exhibition, Emma and Frankie, both seasoned competitors who are very familiar with each other, are able to jump together to wow the crowd. 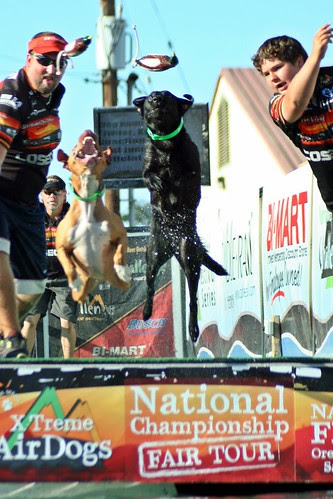 Emma here, and her handler Josh, won the National Championship last year. This picture is from one of the competition waves this week. 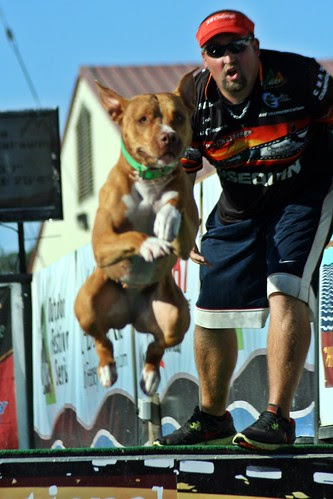 Pallo doesn't really dock dive, as you know if you've seen my previous posts about it. I brought him along as a crowd puppy. He helped out by wearing the Chase Away K-9 Cancer donation vest and brought in $37 in donations for a great cause.

I did take him out on the practice dock during the down time between demos, exhibits, and competition waves though. And you know what? He actually jumped off the dock three times. About a total of a foot or two in distance, but he did it! He wouldn't do it a fourth time, but I'm hoping he will get some more confidence with practice and be a competitor next year.