Me and my dogs seriously love doing reviews for Chewy.com. We get the chance to try out new and different products, many of which aren't available locally, and then we get to share the awesomeness with you guys, our readers.

For April, we were sent some Wellness Petite Treats to try out. The turkey, pomegranate, and ginger flavor that we were sent was a big hit. The treats have a strong smell, but it is a sort of fruity smell that even the humans don't object to. The dogs went nuts. My dogs loved these treats. They actually loved them so much that I spent about an hour looking for the other size treat dispensing piece of our Manner's Minder (a remote control training device that dispenses treats), hoping to find the one with larger holes so I could use the Petite Treats in the MM for training. Unfortunately, the treats are just a tiny bit too big to work with the MM, which I was a bit bummed about. But that is seriously the only downside to these treats that I have found. If you've never worked with a MM before, that means these treats are about the size of some of the larger kinds of kibble. 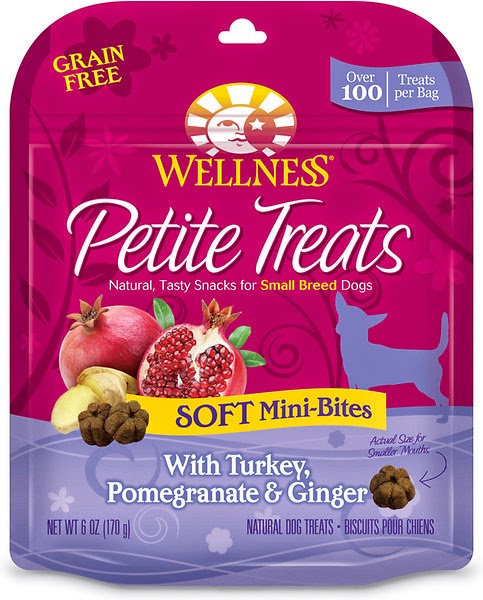 Well, okay, there was one other downside, but it was a pretty hilarious one. Since the treats didn't fit in the MM, I brought them along to flyball practice to use as rewards. I normally use toys to reward at flyball, but I like using treats for certain drills, and I like to switch it up every once in a while just for kicks. (Honestly, I want my dogs to be able to go out and play even if I forget their special toy- I want them to be able to go out and play with any toy or treat I happen to have with me!) But, while the Petite Treats worked great as rewards for my dogs- I also ended up distracting the other dogs who were practicing. Not just the green dogs either, though I did distract one green dog. The experienced dogs who have never had a problem with any other handler having treats in the ring were all running over to me and sniffing the ground for dropped crumbs, hoping desperately for a bite. Luckily my teammates were amused rather than annoyed! They made sure to take note of the brand and flavor so that they have the absolute best dog treats in the world next time. These treats are so good that they helped catch a Pharaoh Hound at lure coursing practice who decided, after his run for the lure, that he would rather run laps around the field.

In any case, these treats really are seriously awesome, as is Chewy.com. Shipping is always quick and right to your door. (The first time I tried Chewy.com, I did have a slight issue with the shipping, but it turned out to be due to confusion on the part of the delivery driver, which was solved after I introduced myself to him one day and showed him exactly where my door is. Since then, all packages from Chewy.com have arrived super fast right to my doorstep.) These treats are only 4.49 for a 6-oz bag, which contains over 100 treats. I plan to order more, and possibly even try one of the three other flavors. And I know my flyball teammates plan to pick some up!

I think spring must have officially arrived. The flowers are all blooming something crazy, and I even saw the first honey bee of the season yesterday. 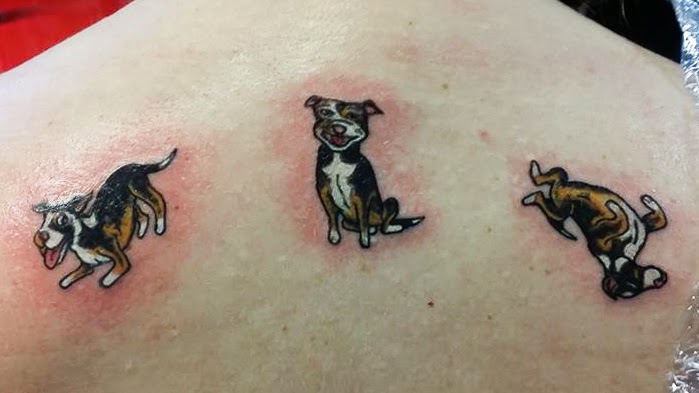 My brand new tattoo, just minutes after completion. Right now its more in the itchy/scabby part of the healing process. These are up on my upper back/back of shoulders area, with the sitting image centered over my spine.
15 comments: 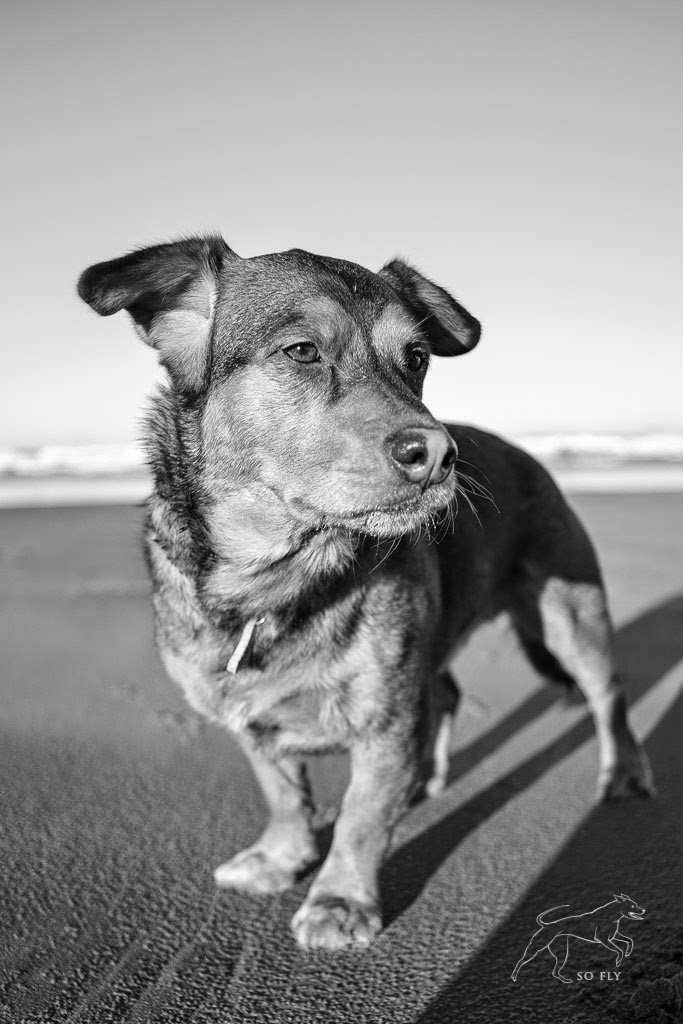 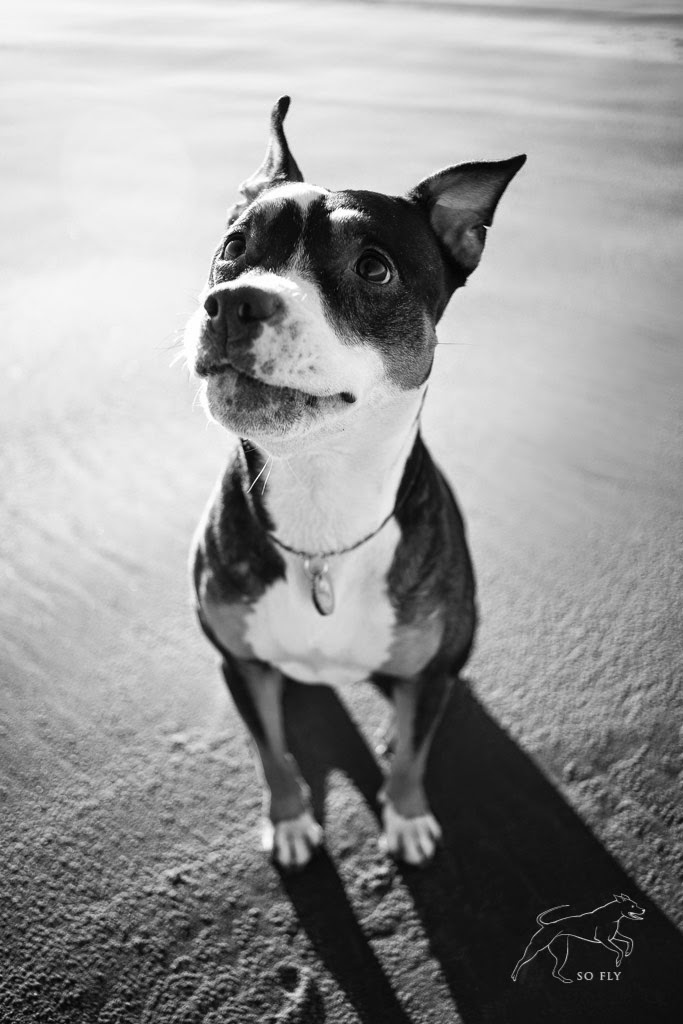 Koira's injury recovery is going really well. This past week, I reintroduced her to two flyball exercises. The first one is a recall over jumps, sometimes referred to as a runaway. Basically, one person sits on the flyball box and holds the dog, while the dog's handler runs down the jumps to the other end. The dog is released to go over the jumps and is rewarded by their handler at the other end.

Recalls are a big part of the training game to get the dogs used to going over the jumps every single time. The pattern is always the same: flyball box, then fifteen feet away is the first jump, then each of the four jumps are placed ten feet from each other. We also use recalls as a warm up before running the full course. They are something we can easily do in a tournament setting during our designated 1 minute warm up time, so they also translate easily to competition.

For me, they are also one of the first things I reintroduce a dog to after they have had an injury. My teammates are all aware, of course, of Koira's injury, so watched her very closely for me for any signs of her looking not right. Koira looked just fine to everyone, if a little overly happy at being back! I am cautious about rewarding her with a tug now, since her injury was to her neck. I know when dogs tug a lot of pressure and force is put on their neck muscles. So I am trying to come up with alternate ways to reward her that Koira still finds rewarding. Food doesn't work in flyball for her- she just doesn't find it rewarding enough. On Sunday, I rewarded with a tennis ball, which seemed to work well. On Thursday, we did a few quick runaways as well, and I rewarded with a toy, which she seemed to like even more than the tennis ball.

While we cut practice short on Thursday this week (I was still feeling a bit under the weather from a bout of food poisoning on Tuesday night/Wednesday morning), I did do a few wall turns with Koira on Sunday before practice was over. I took it easy and tried not to do too many, but Koira seemed happy, had high, snappy turns, and looked good both during and after.

I do think that Koira will be back in flyball, and sooner than any of us thought when she was first injured. But, I don't want to push her. The absolute earliest time she would be in a tournament at this point is July, and that will depend entirely on how she is doing leading up to that point. It is much better to miss a few tournaments (or even a lot of tournaments) and have a healthy dog than to bring her back too soon and injure her, possibly worse than the original injury was to begin with.

In the mean time, we will continue with a slow, steady reintroduction of activities. Along with flyball recalls and wall turns, I plan to start reintroducing fetch this month as well. Koira has been doing free running (that is, running without it being controlled by me) for the past month. Her muscling is coming back in nicely, though she is still a bit on the light side. We'll start with light, short sessions of fetch with plenty of free running before and after to make sure she is moving loosely and warmed up. My current plan, if everything goes smoothly, is to start full runs in flyball in May.

As a final note, unrelated to this particular post but certainly of relevance to my post last week, a flyball friend of mine who runs a lab agreed to send me a few photos of her dog. Labs seem to be one of those dogs that everyone wants to see fat. Even when people think their lab is in shape, they tend to be fat. This is a purebred lab, not a mixed breed. And she is in beautiful working condition. This is the most singularly impressively in shape lab I have ever seen. 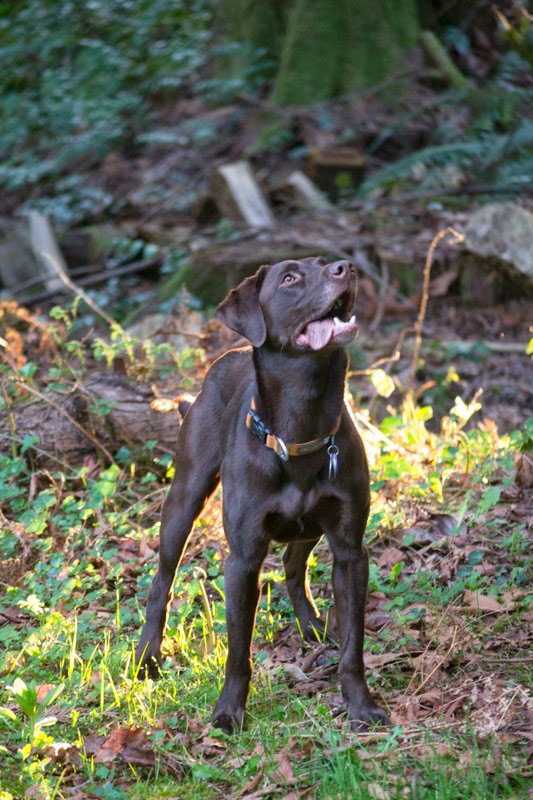 Notice in the front views that she has a distinct separation between her neck and her shoulders. They do not just meld one into the other. Her chest is gently curved at the bottom, not straight across, and it doesn't extend down below her elbows. Dips and bumps along her chest are obvious but not huge, showing anatomy that is well built but not skeletal. Her muscles are well developed and visible, even when standing. 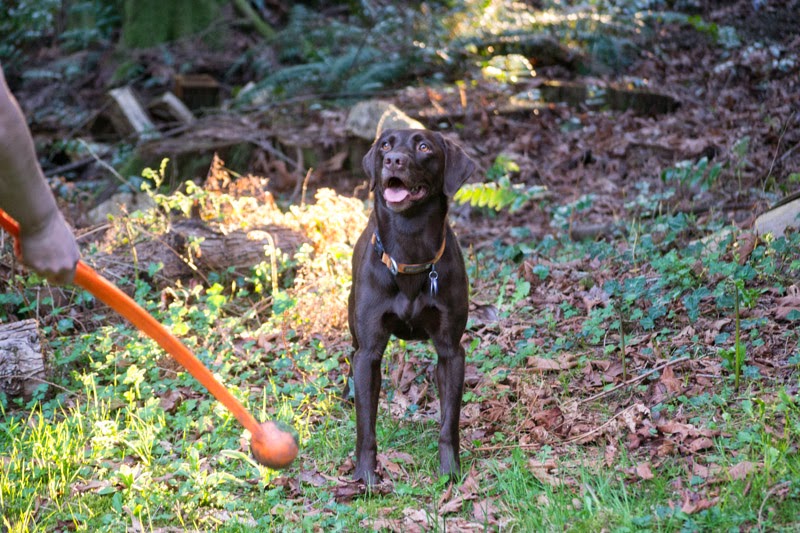 In the straight on picture above, you can see a bit of her well muscled hips/thighs showing around her shoulders, but no stomach fat. At this angle the chest is still well developed, muscles are still obvious, and the neck and shoulders are still distinct from each other. 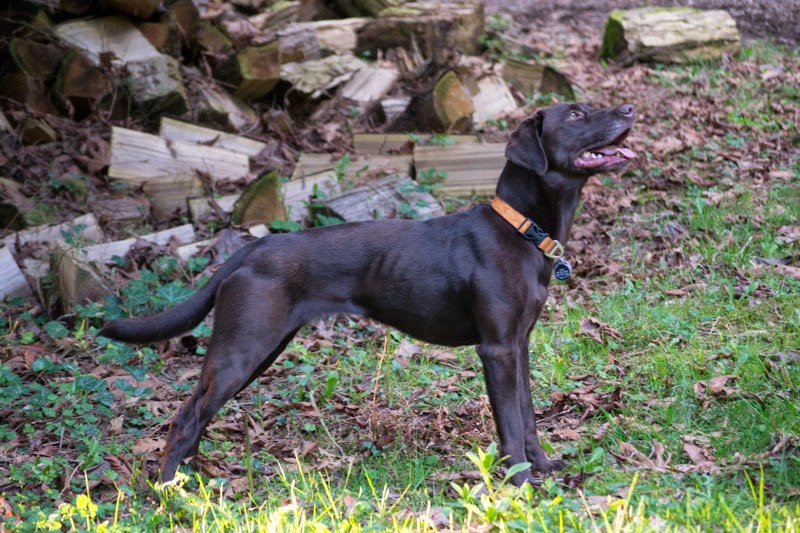 And now the full side photo. You can see well developed muscles all over this dog. Her shoulders are well defined enough to separate the main muscles in the area just by looking. Her last couple of ribs are lightly visible. She has a distinct tuck up after her rib cage, leading back to a well muscled rear. While you can't see the spine or hip bones, they are both felt easily without having to dig around or search.

THIS is what a well conditioned lab should look like. Another pound or two would even be okay, though this dog is certainly not underweight. But an extra pound would make maybe the last two ribs lightly visible instead of the last four, which wouldn't be a bad thing. When you have a highly conditioned sporting dog, you spend a lot of time wondering if they might need to gain another pound or two, or lose a pound or two. But their weight, when actively competing and in condition, should not vary by significantly more than that. Five pounds would be way too much for this dog to either lose or gain.

In closing, I will clarify that not every dog needs to look like this. This dog is an active and very successful flyball competitor, and does other sports as well I believe. Your average pet lab doesn't need this kind of conditioning or definition in the muscles. But the pet lab should not be significantly heavier than this, either- the main difference shouldn't be in the visibility of the ribs, tuck up, etc, but in the definition seen in the muscles. A pet lab isn't jumping and twisting in a way that another few pounds adds tens or hundreds of pounds of pressure on the joints on a regular basis, so can be a couple of pounds heavier. A senior should reasonably kept in shape but with a few more pounds, in case of injury or illness where a bit (a small bit!) of extra weight acts as a buffer if they can't eat for a few days. But it should never be enough extra weight that the joints are being put through tremendous extra pressure or the heart will have trouble pumping blood through the increased mass.
4 comments: