I took off with the dogs yesterday to go visit my dad and take a trip up to Hebo Mountain. We camped up there a few years ago and just loved it. There were wild strawberries, service berries, blackberries, blueberries, and more, which we snacked on the whole time we were there. With the weather all funky this year, everything is coming into season late. Even though last time we were up there was in July, this year's September was much the same for vegetation.

We drove up to the first crest of the mountain and were surprised by the huge number of people up there. Then I noticed a lot of the trucks were labeled "Search and Rescue" while a lot of the people were in official gear. We stopped the car to ask if there was a search going on or just training, and we were told a hunter (it is bow hunting season here) had been lost on the mountain, but had been found.
We kept driving on past all the chaos to the place we had previously camped. My dad ran off to collect some sort of seeds from a plant he saw up there previously and wanted while I started picking wild strawberries in the small meadow. It wasn't long, though, before three search and rescue trucks pulled up nearby. I walked over to see what was happening, and it was some of the people with the dog teams, wanting to do some training drills.
I volunteered to be one of the people to get "lost" for the dogs to find. They were working on scent discrimination, so each of us going to hide carefully unwrapped a piece of sterile gauze and wiped it on ourselves, standing way apart so the wind didn't put multiple scents onto the scent article. Then we walked together up the trail a ways, and when we reached a meadow, we all split off in different directions and went to hide.
I took off to the right, aiming for some trees over there so I could hide in the shade with the dogs until it was our turn to be found.
The view from our hiding spot: 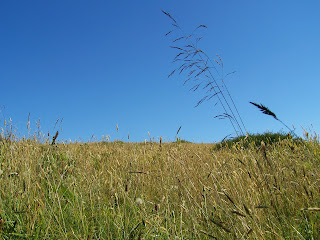 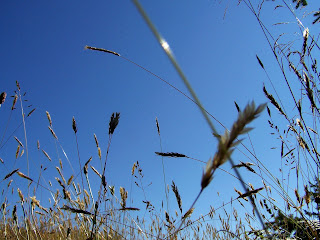 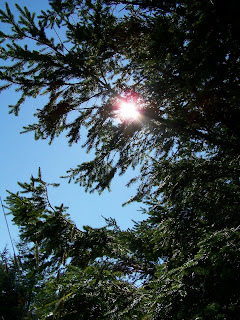 One of the dogs finding a different person went first. We could hear them working the trail, but knew they weren't coming to get us. Since I had the dogs with me, they were using it as a training opportunity for a young dog of theirs to learn to follow the human scent instead of the more interesting dog scent.
While we waited, I took a couple pictures of the pups and our surroundings. 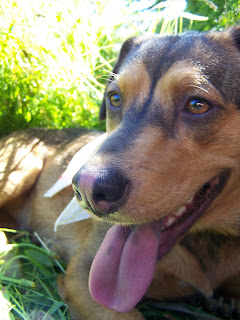 Pallo was bored, and didn't know why we were just laying around in the shade instead of running around exploring. 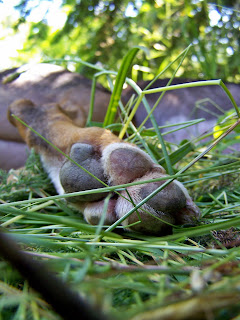 Koira just took the opportunity to lay down for a nap in the nice cool grass.
Then Koira heard the searchers coming: 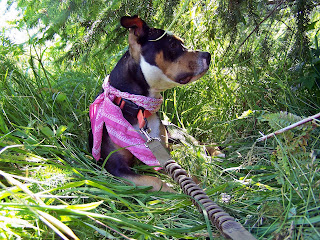 They started out from that direction, then passed by us on the main trail. 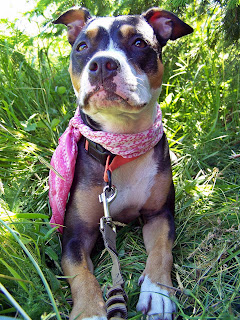 Then they made what I heard was a really nice corner, following our trail as we took off through the meadow, and came up and found us.
This is the bloodhound who searched our trail: 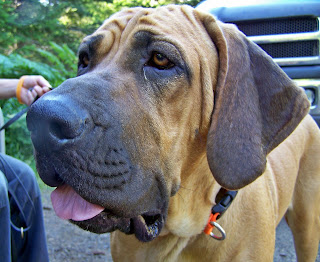 She was a total sweetheart.
We did a lot more on the mountain, but this story of helping out some working dogs seemed pretty perfect for a Labor Day post. This Search and Rescue unit got called out for the search, then when they arrived were told the man had already been found. A bit of a waste of the day (if they hadn't stayed around for practice, at least), but as one woman said, any live find is a good find.
Hope everyone else is enjoying their Labor Day weekend, and don't forget to leave a comment to be entered into the Giveaway!