Me and the dogs headed to lure coursing practice last night. It was a bit of a debate between conformation classes with Pallo or lure coursing with both dogs, but as much as Pallo needs the stacking, standing, staying, and handling practice, lure coursing is just so much fun that it won out. Plus, there is a CAT (Coursing Ability Test) coming up next month that I'd like to take the dogs to, so I wanted to get in at least one more practice before then. For those who don't know this, AKC has opened up lure coursing to all breeds for the CAT. So if you are looking for a fun activity for your dogs, and maybe a title or two to show for it, lure coursing might be worth checking out!

Since its getting dark so much earlier nowadays, I don't have any pictures of my dogs on the course. Or any dogs on the course. But, I did make some coursing slips to try out with my dogs and used them for the first time last night. Using a slip is super easy but not super obvious on how to do it, so I thought I'd put up some pictures showing how to using a coursing slip.

First off, this is a lure coursing slip (there are many kinds out there, this is the type my club taught me to use, and which I believe is the most common type of slip). It has a wide collar area with a D ring on either side, then a narrower webbing is used for the leash. 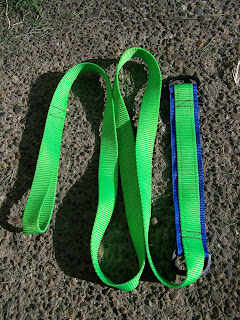 To use the slip, you pull the narrower webbing through the first D ring partway to form a small loop. 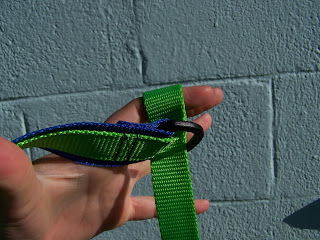 Then loop the collar part around the dog's neck. 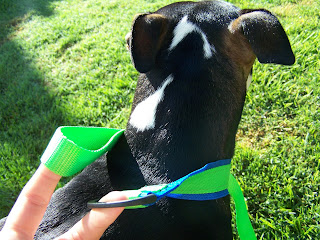 Pull the loop of webbing through the other D ring. 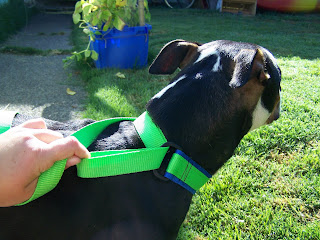 On the line, hold onto the leash with one hand, firmly, while gripping the loop with one or two fingers. When they call Tally-ho and start the lure, simply drop the loop. 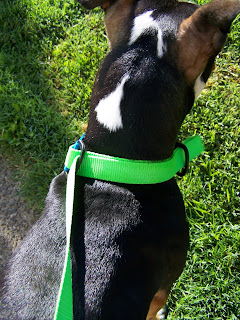 Continue holding onto the leash part, and the dog's forward momentum will pull the collar easily off, releasing them quickly and cleanly after the lure. Don't pull the leash as the dog is released, as you will then swing the collar around when it comes loose, smacking yourself or someone else nearby with it, which hurts. Any questions on how to use this style of coursing slip? Feel free to ask in the comments and I will clarify if possible.
While you don't need to use a slip like this to run the CAT, it makes releasing the dog fast and easy. Plus, I like having the "proper gear" even when it isn't strictly required. (Probably why I have bins full of dog stuff for all occasions.)
I'm even planning on using this slip to release Koira for flyball, since it is so fast and easy. She likes running naked the best, and I find the slip easy to use and prefer it over the standard flyball collars or harnesses but find Koira way too slippery to hold only by her shoulders, chest, or hips. Plus, I think it will help her to run away from me faster, since she will practice running away full speed when released from the slip for lure coursing, which might (I can hope, right?) increase her speeds to the box for flyball.
Think this coursing slip is nifty? Want one of your own, for lure coursing, flyball, or some other genius plan? Maybe you should leave a comment and enter my 100 Follower Giveaway!
How the Giveaway will work:
You can enter once per new post by leaving a comment. On Friday of next week (the 9th), I will assign a number to each comment, in the order they have been received. I'll plug the numbers into a random generator, which will pick the winning comment! I'll announce the winner, who will have a week to reply with their mailing address (open only to continental residents of the United States and Canada).
The winner will get to choose between a lure coursing lead, made with their choice of colors and size, or a 4 foot bungee leash, in choice of colors.
The bungee leash looks like this: 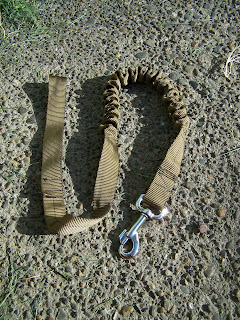 It has a 1 foot bungee section that extends up to 2 feet. The bungee in this leash reduces shock from the dog abruptly hitting the end of the leash and also keeps the extra loose leash from dragging on the ground or getting tangled when your dog is walking nicely. I like using these when biking or jogging with the dogs to reduce the shock and to avoid having to stop and untangle me or the dog from the leash.
So, start commenting away!