Chewy.com let us review some Cosequin Minis joint supplements for small dogs this month. Now, Ptera is a puppy still, and has no apparent joint issues. But I'm of the opinion that it is never too soon to start helping maintain your dog's healthy joints.

These Cosequin Minis were perfect for Ptera. They are small enough for her to easily eat, and soft enough to chew up. Plus, she really liked them. I've been using them as the treat she gets when she goes in her crate before I leave for work, and they are tasty enough to her that she happily leaps into her crate in anticipation when she sees me grab the bag.


Since she was moving fine before starting these, I can't say for sure what effect they have had. But, I feel like a small dose, regularly given, of a joint supplement can only help a growing dog develop strong bones and healthy joints. The Cosequin Minis are obviously a good choice for a small dog, since they are appealing, small, and easy to chew. Ptera has had no stomach or digestive upset since starting them. I would certainly recommend these to anyone with a small dog (Ptera weighs 10.5 lbs, as of her most recent vet visit). At 12.99 per bag right now, they are affordable as well.


As always, while Chewy.com did provide us with this product in exchange for a review, we were not compensated in any other way, and all opinions expressed here are entirely our own.
No comments:

Some more photos from our camping trip with friends last month. We've been hiking a lot lately too, I just haven't been getting many pictures.

Yesterday was Earth Day. I thought I would share a small section of the walk me and the dogs took yesterday. Five minutes of video compressed down to 45 seconds. Enjoy.

The (not so) Joys of a Puppy

Puppies are a lot of fun to raise in many ways. The fun parts are what everyone thinks about when they think about getting a puppy.

The not so fun parts are the parts that cause people to dump puppies at the shelter. The not so fun parts are the parts you have to think about a LOT before bringing home a puppy. Because if you can't put in the time to potty train, if you aren't willing to clean up accidents, if you can't stay calm when the puppy makes mistakes, if you can't react appropriately when the puppy is chewing something important that you are upset at having ruined, you shouldn't get a puppy.

You can probably imagine that when I announced I had added a puppy to the family here, a lot of people responded saying they wanted a puppy. I promised to share the bad parts, along with the good. Because there is a lot to be said for enjoying someone else's puppies instead of getting one of your own.

Ptera was not potty trained when I brought her home. At six months old, she more or less would choose to pee and poop outside when given the option, but wasn't super good about it. Within the first two weeks, she peed on my bed (not allowed on the bed anymore for the foreseeable future), pooped in her crate (yes, she was let out beforehand, I just didn't give her enough time outside before crating her when I left for work), and peed on Koira's favorite bed (the cave bed). Being told off by Koira a couple of times for rude behavior (trying to steal a chew toy Koira was actively chewing on once, Koira's Kong she was working on the other time) resulted in some scattered pee droplets as well. Koira can be pretty intimidating. And puke a few times on the carpet, and on the linoleum in the bathroom, as she gets used to eating the kibble/raw rotation we feed here. Oh, and a carsick puke in her car crate a few days ago too.

All of these incidents were not fun. Cleaning up pee, poop, and puke is never particularly fun, especially if you can still smell it later, or are potty training and know that any little bit of smell left could encourage more accidents in that same area. Luckily for me, Chewy.com offered to send us Nature's Miracle Stain & Odor Remover to review this month. It couldn't have come at a better time, really, because who needs stain and odor remover more than someone with a puppy? I think I can safely say that I have been testing this stuff to the max, and with great results.

That puke in the car crate? Can't smell it at ALL even after the car baked in the sun for hours while I was at work (obviously without the dogs in it). The dog bed? Free of the smell of pee (though currently waiting to be washed anyway because it was getting pretty grungy after a wet winter, and needs to go to the laundromat to get washed). My bed? Not even the slightest wiff of pee even without flipping the mattress. Just spray, scrub, spray, wipe, and let dry. The carpet is the same. The house kennel with the poop was probably the worst to clean up, because she obviously had pooped a few hours before I got home so it was kind of mashed into the wire bars of the kennel, so getting paper towels into all the cracks and crevices without missing anything was something of an ordeal. But in the end, no nasty smell remains.

I will say that I didn't notice any particular smell with the Nature's Miracle even though it is scented. It certainly isn't a strong smell, which in my opinion is a good thing. If it smelled like an air freshener spray, I would worry it was covering up the smell of pee/poop/puke/etc, rather than actually cleaning it.

Oh, and I want to give a shout out to how awesome Chewy.com was when it came to sending this product. This is the first liquid product I have gotten from them, and I was super impressed. Chewy put tape around the screw cap on top of the bottle, ensuring that it didn't leak while in shipment, then put it inside of a sealed plastic bag as well, to make sure that any leaks didn't ruin anything else in the box or make the whole package soggy. So while the inside of that bag was bone dry, I did appreciate that extra step taken. Of course I forgot to take a picture for the blog, sorry!

As usual, I was provided with this product for free in exchange for an honest review. I was not compensated in any other way, and the opinions shared here are entirely my own.
2 comments:

The fields finally dried out enough for us to do some lure coursing this past weekend.

It was Ptera's first time, but she had a blast and totally loved it. 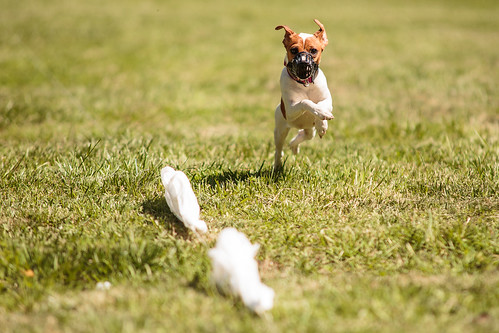 Koira, of course, had an awesome time. She loves lure coursing. 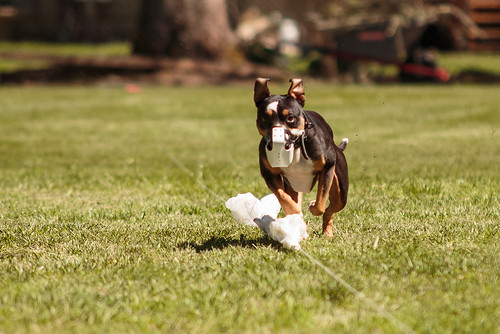 And Pallo had a great time as well, though I think he wished I'd forgotten his muzzle so he could totally shred the bag. 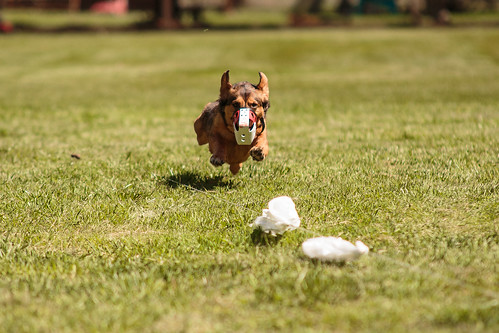 Have your dogs every tried lure coursing?
4 comments:

The friend I went camping with last week also has a puppy, Flynn, a papillon/border collie mix. They look good together.

For March, I was lucky enough to review two different items for Chewy.com. Of course, when I was planning out my month, I had no idea I was about to bring home a 6-month-old Jack Russell puppy, so things got a little crazy. I've fallen a bit behind in my planned blogging. That said, I did make sure to try this awesome product with both dogs (and the cats too, because they insisted).

Stella and Chewy's is a company that does freeze dried raw pet foods. The do both full meal items such as their freeze dried meal patties, and freeze dried raw toppings, which you can then add to kibble, wet food, or actual raw meals you prepare yourself. The toppings come in little nuggets that actually work well for treats too, so if you feed an all raw diet and have trouble finding/making treats for your dog, these are a great option for that too- just remember, they are raw, so be just as careful with food handling as you would with any other raw meat.

I tried out the beef flavor meal mixers, but they do come in four different flavors- chicken, beef, turkey, and salmon & cod. They do contain more than just the protein listed, so if your dog has food allergies, make sure to read the ingredient list. That said, all of the ingredients are really high quality, so outside of allergens, I had no reason not to feed these. Especially because they are made in the USA with USA materials.

The bag of mixers comes with a convenient little scoop that you can use to get the toppings out with. Or you can just dump, or grab with your hands (remembering to wash afterwards, just like you should after touching any raw meat, or any dog food, for that matter). Both Koira and Ptera absolutely went bonkers for these added to their kibble. They are a bit too big to work in the Kong Wobbler for Koira, but that was seriously the only downside I saw to these.

As treats, they are pretty easy to break into smaller pieces without crumbling too much, though it is easier if you go with the grain of the meat. They don't disintegrate horribly like some freeze dried products when carried in a treat pouch, which was nice, but will disintegrate worse if you rip them into smaller pieces earlier, so I just ripped them up as I doled them out.

Overall, I think these are a great way to add some raw to your pet's diet. If you feed all raw already, they make a great raw treat that travels well. Crushing them up and putting them on raw meat makes the meat more enticing for a beginner raw fed dog or cat. And adding them to a meal of kibble gives your dog a bit of the benefit of eating raw with absolutely minimal work on your part.

As usual, while we were provided with this product free of charge in exchange for our review, the content of this review is entirely our own, and we were compensated in no other way.
1 comment: