On Christmas Day, the dogs got to go to the park and open their Christmas presents before I went to a movie with my mom.

Pallo rips into his presents gingerly and with great care.
Koira, on the other hand, LOVES ripping into presents. I had her sit, and then tossed her present to her. She caught it mid air, then bolted to the middle of the park to unwrap it. 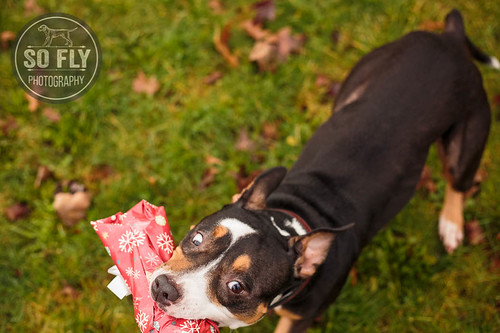 Of course, I then had to wade through the muck of the park to go pick up the wrapping paper she left there. About two seconds after the below photo, she grabbed the paper and tore it into about twenty smaller pieces before she decided her present was fun too. 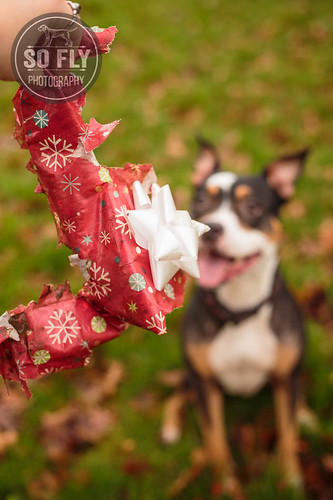 As well as presents, the dogs got frozen stuff Kongs as a special Christmas treat. (I can't ever remember to stuff and freeze kongs in advance for the day to day life we live.) Chewy.com sent us a limited edition Merrick canned holiday recipe to try out and review this month, so I used that to stuff the Kongs. Both of the dogs thought it was some awesome stuff, both frozen in the Kongs on Christmas and when they got to lick the spoon clean from stuffing the Kongs on Christmas Eve. The cats also got a few spoonfuls of Merrick as well as a Christmas morning treat. My cats are pickier than my dogs, but still, everyone in this house thought this was some super tasty stuff. To me, it looked and smelled like any number of canned dog foods, but the cats at least won't go crazy over just anything (the dogs totally will).

For New Year's Eve, I took the pups down to the park to play with their Christmas presents. Our weather right now is super cold and clear, but while my hands were freezing, the dogs seemed to have a lot of fun playing.

Pallo got a package of the rubber Chuck-It balls for Christmas, since they are his favorite toy ever. 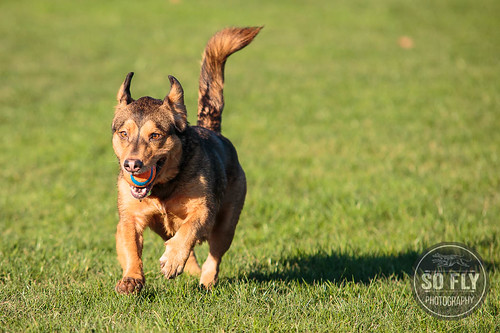 Koira got a Ruffwear Gourdo toy, which is basically a kind of dense rubber bumper. So far, she hasn't destroyed it, which is a good sign I think. And she always loves bumpers. 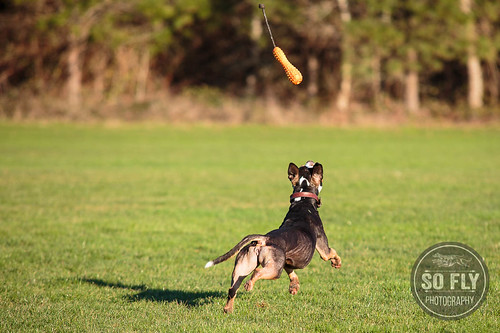 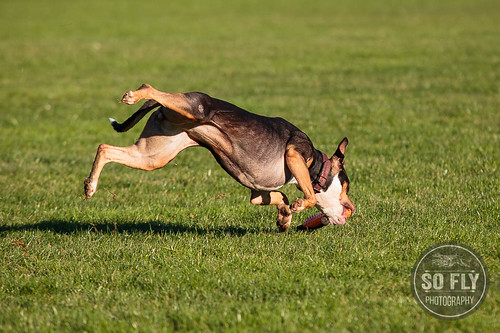 I hope everyone had a wonderful Christmas and has a great New Year.

Wordless Wednesday: Dogs on a Trike

Vaguely holiday-themed, here are my dogs on a trike.

Hope everyone has a great Christmas Eve and Christmas Day tomorrow.
6 comments:

Email ThisBlogThis!Share to TwitterShare to FacebookShare to Pinterest
Labels: Stuff on my dogs, Wordless Wednesday

On Facebook last week, Jodi from Kol's Notes shared a link for this awesome holiday printable. I just had to print it and use it as part of our holiday decor this year.

I downloaded the free PDF file and converted it to a JPG in order to print it. Then I used an online print option at a local store to print the artwork at 11x14. I picked up a cheap 11x14 picture frame at the dollar store, some Christmas themed washi tape at a craft store, and decorated the framed artwork with the washi tape and a single bow. I love the clean white/black of the artwork, and just wanted to jazz it up a little without it becoming cluttered or overbearing. Overall, I think it turned out great, and the project cost less than $10 all together for the photo printing, frame, and washi tape.
1 comment:

This year, I decided to give back a bit by volunteering to shoot photos. Linn County Animal Control is where I adopted Pallo almost five years ago. Back then, they had some pretty appalling euth rates. The past year or so, though, the shelter has really been making some big changes. The kennels have been improved, a play yard was built for the dogs who are staying there, and they have started making a serious effort to transfer animals to other shelters and rescues when they need space. Instead of the hundreds of dogs being euthanized each year (500+) in the past, the progress they have made means that fewer than ten dogs have been euthanized there this year. In addition, they have expanded duties now, and instead of just being dog control, they are animal control, meaning they have to take animals like horses, cows, goats, and other animals sometimes. Of course, all of these changes are amazing, but they all cost money as well. Recently, animal control gained a nearby lot that they are hoping to turn into a larger play yard, holding pens, and stalls for livestock to be temporarily housed.

I was hoping that by volunteering as the photographer for a Christmas photoshoot and asking for donations for Linn County Animal Control that they could get some great donations to help with the awesome work they have been doing. The staff were enthusiastic for the idea and excited to help with getting the entire thing together. They decorated the play yard for the photoshoot and got one of the local officers to dress as Santa for the photos as well.


I think the staff did an amazing job decorating. And having a very dog-savvy Santa, as well as two of my dog-savvy friends coming along as assistants, made the entire thing go nice and smooth. Not a single dog went away without getting their photo taken, even a few who were extremely shy or nervous.


And of course, I had to get a few photos of my pups while we were there. Pallo was our test dog at the beginning, to make sure everything was right. And I snuck Koira in during a slower part of the afternoon. I'm pretty thrilled with the photos of my dogs, and I am pretty sure everyone who came is going to be happy with their photos as well. And hopefully the shelter got some great donations from this event.
4 comments: