Today I discovered flygility, which is exactly what it sounds like, a combination of flyball and agility. Instead of just having 4 jumps to the flyball box and back, there can be jumps, tunnels, contact equipment, basically anything you would see in agility.

New Zealand seems like the only place where it is a sanctioned sport, but it looks like a fun thing to practice and make flyball more diverse and interesting to the dogs sometimes.

I'm debating going out tomorrow (if the weather smiles on us) and setting up a course with a tunnel instead of the middle two jumps... I wonder if that would confuse Pallo too much, or if he would enjoy it. It might even be the key to getting Koira jazzed back up about flyball.
No comments:

Email ThisBlogThis!Share to TwitterShare to FacebookShare to Pinterest
Labels: Flygility

And so I started blogging

First I guess let me introduce my dog beasts, as they will likely end up being the main content of this blog.
My oldest dog, Koira is about 2 1/2 years old, and I've had her since 8 weeks old. She was being given away in a Craigslist posting for free puppies up in the Portland area, and I fell in love with her martini face and bat ears. She was an adorable puppy that I just couldn't resist. 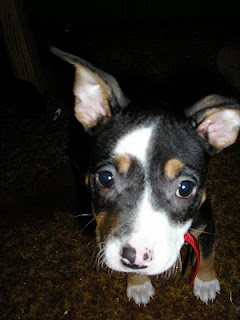 My little bat eared dog has grown up to have normal sized ears, but does retain her martini glass face shaping, setting her apart from most tri-colored dogs I've known. 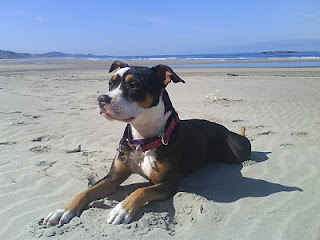 We started flyball a year ago, more for me to have a sport with my dog than because Koira wanted something to do. Generally she is pretty content laying on the couch all day, as long as she gets a chance to get out and run.

I now have a less than great view of our starting training techniques, but I believe that is something pretty common with people when training their first dog for their first dog sport. It takes the training process to learn how to properly train, and I may have ruined my first flyball dog while learning myself how flyball should work.
We used lots of props in front of the box, including a cone and jump, and started by forcing the dogs up onto the box while running by it at a very wide angle. Often our knees were used at this point to help nudge the dogs up onto the box. The ball was introduced quickly, and always used as the reward. We trained wide, sloppy, low turns, and basically didn't know any better. 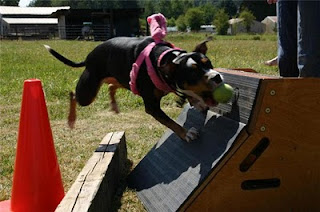 After nine months of training, we entered our first tournament. It was bad. No box turns were in evidence, and Koira was running around the jumps on her way back every single time, unless she bobbled the ball. She never left our lane and always came back to me, but that's about the best I can say about that. Basically, we weren't ready.
Despite our fail at the tournament, I went home excited about flyball. So, what else was there to do but to go out and get... another flyball dog. A height dog, of course. And it just so happened that the local shelter had this thing in as a stray, up for adoption that Monday. 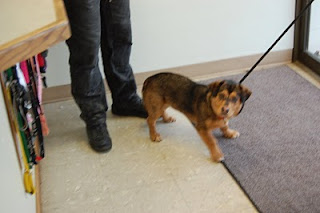 Yup, its a bad picture of a funny looking corgi mix. This is actually the picture animal control had up of him, and it is, as you can see, not very flattering. Admittedly, not very many shelter pictures look amazing, but this is still one funky looking dog.
In any case, I called in to the shelter, and had them measure this dog at the shoulder, and toss him a tennis ball to see if he was interested. They told me he measured 14 inches, and was nutso about the ball. I went in to meet him, bringing Koira along as well, and left with a flyball height dog prospect. He was predicted to be between 8 and 12 months, so I called it middle of the road and officially made him 10 months old, making his birthday April 1st.
I adopted Pallo at the beginning of February, and after he was neutered and rid of a huge load of round worms, we started a CGC obedience class and flyball practice at the beginning of March. And I realized I had gotten lucky with this one. He was a natural at flyball, and a fast learner in obedience. Being highly food motivated helped at CGC class, but at flyball, that ball was all that mattered to him. So I trained him to tug.
Pallo the Viking (as he is registered with NAFA) earned his CGC at the end of a single 8 week training course, though I am sure he had little or no training before that. And then, just one week ago, only three months into his flyball training, Pallo ran his first tournament. And ran clean in all 15 heats that he ran.
He still looked like a goof the whole time though. I don't think anything will ever make this dog look noble, or agile, or graceful, no matter how well he can actually move. 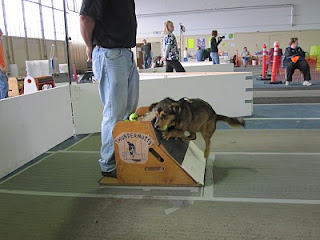 So then we have now. Pallo earned his Flyball Dog title at this past tournament, and had the rest of our team run as well as he did, he would have earned more than that. He is still in training and is gearing up for a trip to Canada in June (partly for flyball, and partly because I have never been up there). Koira is retraining her box turns the other direction, and while she is doing really good with that, we are taking a break from flyball for a while. She gets bored easily.