Chewy.com sent us an Outward Hound Kibble Drop Food Toy to review this month. We were sent the toy for free in exchange for a review, but received no other compensation and this review is our entirely honest experience with this toy. 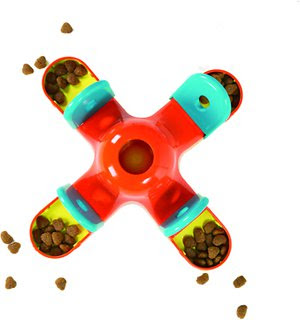 Koira is something of a genius when it comes to food toys. But I was planning to visit a friend for a few days who has dogs who are a bit slower with this kind of thing, Bugsy and Thimble.

I filled the toy with kibbles and let them go to town, with a little supervision.

Bugsy (the border collie) figured pretty quickly that the easiest way to empty this out was to just grab it and walk away. But, once the kibble spilled during that stunt was cleaned up, Bugsy figured out the toy pretty quickly. He is normally a dog who just inhales his kibble super fast, so using this toy helped slow him down a bit. Obviously for this, we just filled the toy with kibble. To make the game last longer and be a little harder, you can drop just a few treats or kibbles in the top of the toy and have the dog have to figure out which part they ended up in.

Next up, we made Bugsy sit on the couch so that Thimble would have a change to figure out the toy and get her dinner.

Thimble was somewhat reluctant to interact with this toy. She can be weird about new things sometimes, totally contrary to her otherwise super confident self. The video really shows how I was encouraging her to get into it and play with the toy. The video stops right before she figured it out (the phone used to video ran out of memory right then, of course). But she did figure it out, and once she emptied one section of the toy, she moved on to the next. I think filling the toy with kibble like this is a great introduction to the toy, because the dog is heavily rewarded for interacting with it, and there is a lot of scent from the kibble for the dog to be tempted by. Once the dog gets the hang of it, of course, you can make it last longer by tossing just a few kibbles or treats in so the dog has to figure out which doors are hiding the treats by either going through all of them, or by using their nose.

Overall, this toy was a big hit with Bugsy, and Thimble enjoyed it too once she figured it out. I would not leave this toy unsupervised with a dog, as it would be relatively easy for a dog to chew to pieces. Supervised, though, it is sturdy enough to give you a chance to intervene if your dog is bent on destruction like Bugsy attempted in the first video.

I think this toy was fun, and a different way to feed your dog or play with them. It can be used to slow down super fast eaters, to give your dog a bit of a challenge, an alternative to feeding out of a bowl, and a chance to challenge your dog's nose a bit.
2 comments:

Running Veterans at this past weekend's flyball tournament.
Who says "old" dogs have to act old?

I've done wrap-up posts in the past, where I go over the past year and how it has gone. And I've done goal posts as well, saying what I plan on doing in the coming year. I suppose this is a goal post, of sorts. But I don't have a big list of goals. Specifically, I have two.

I purchased an annual sno-park pass, chains for my car, and two new sets of snowshoes (one of my previous ones broke on my trip in December, so I am now up to three sets of usable snowshoes). The annual sno-park pass is good through October at national park sno-parks. A single day pass is $5, while the annual is $26.

So, my first "goal" is to use my annual sno-park pass a minimum of 6 times, in order to make it financially reasonable to have purchased the annual instead of the daily pass. So far, I've use the pass twice since purchasing it, once in December 2015, and once in January 2016. I'm making plans on going snowshoeing again soon, and possibly sledding at one of the parks in the next few weeks as well.

I think this is a reasonable "goal" to set. I have the financial motivation to do it, since it is already paid for. I really enjoy snowshoeing and getting out into the mountains. And it is really only a little over an hour (two hours if I have to chain up early due to snow on the road) to get up into the mountain for a good snowshoeing trip. The more I go, the more I want to go.

I'm not setting it as a specific time frame, or with specific numbers. It isn't a matter of "take one photo of me with dog each week" or "photos must be submitted by Thursday" because I want to succeed at this. Some weeks, we don't do a whole lot. Or I am not feeling good. Or I am super busy and unable to find the time or motivation to do it. And I don't want to feel like just because I've missed a week, I've failed. That isn't how this is going to work. Instead, what I want to do is when I am out doing something fun, when I have my camera out and am taking pictures of Koira, I want to get some pictures of me as well. I might only get a few photos one month, and then a hundred the next, because that is how life works out for me. And that is okay. The "goal" isn't a strict, rigid structure. I just want to get more pictures of me with my dog.

To this end, I purchased a remote for my camera. I have a tripod, but is a large, bulky one that is hard to haul around with me. I have been shopping around for a small, lightweight tripod that is still heavy duty enough and heavy enough to balance my rather large camera. I'd like to get really good at using the remote and tripod combination to get some pictures. Broaden my photography horizons and all that.

For now, my mom took all of these photos of me and Koira when we went snowshoeing this past Saturday. On Sunday the weather changed and we were hit bad with freezing rain and ice over everything, so we were lucky to get a chance to spend a day on the mountain before the bad weather came in.

Anyway, what do you think of these "goals"? Think they are silly? Awesome? Strange? Do you live in the area and want to help with them by taking a trip up to the mountains for snowshoeing, sledding, cross country skiing? Feel free to comment and let me know!
11 comments:

Email ThisBlogThis!Share to TwitterShare to FacebookShare to Pinterest
Labels: Get In The Picture, Sno-Park Goal, Snow