Apparently, Koira thought her meal yesterday was too small. The dogs each got just under a pound of stew meat (I normally prefer feeding whole roasts, but my sister gave me this stew meat for free when cleaning out the freezer, and I am not one to turn down free meat for the dogs!). I fed them it still half frozen, so that it was slightly harder to eat than a bunch of little chunks of meat.

Koira always comes and finds me when she finishes eating and looks at me mournfully. I know she is hoping for more food. Some times I do feed them in "courses" and they'll get something more. Not this time, though. The chicken quarters thawing out were for today, not for dessert last night.

Koira then chewed on a bone for a while (left over from some round roasts). I headed to bed to read for a while before going to sleep. While I was reading, I suddenly started hearing a crunching noise. Not good when the last thing I saw the dog with was a bone.

Find Koira. See what she is eating. An apple. She stole one of my apples from the bag of them near the door. How strange. When she finished that one, she went back for another! In all, Koira helped herself to three apples. She was rummaging around in the bag for another one, but I told her I think that was plenty. She actually listened, I guess, because she came back out of the bag without an apple. Silly dog.

And Pallo, of course, was all jealous that Koira had apples. He would stare at her, then at me, asking where his was. And I had to tell him, Hey, I didn't give her that, she totally stole it!
13 comments:

Email ThisBlogThis!Share to TwitterShare to FacebookShare to Pinterest
Labels: Black and White Sunday

A Walk At The Park

This park shouldn't be mistaken for a "dog park" though. Instead, it is simply a park for people to go and enjoy themselves, which happens to allow you to have your dog off leash.

We do have a "dog park" in town. It is a tiny little fenced area with one big tree, a few benches, and lots of mud. I don't go there. My dogs have been attacked in that park multiple times. And, my dogs don't really want to go explore such a small place when I am standing around. If I wanted to stand outside with my dogs and play fetch, I'd do it in the back yard.

The great thing about the sporting fields allowing dogs off leash is the size of the park. Unlike in the small fenced park, the dogs love going off and exploring here. Since I am walking along a path or trail, the dogs get a chance to wander around, go sniff, play, and stay constantly engaged without me having to carry a ball or disc around to play with them (though of course many people do bring toys).

If any other off leash dogs are around (and we generally see at least a few, and sometimes a lot), my dogs get the chance to say hi. Since dogs are off leash at this park, few tend to be dog reactive. If we ever run into a dog who doesn't like my guys, or who my dogs don't care for, we can simply keep walking. It is amazing how easily deflated situations can be by simply speeding up a bit, continuing down the path, and calling the dogs.

Since the sporting fields aren't fenced, I think people who do bring their dogs off leash there have better control over their dogs than those going to the "dog park". Dogs who listen not at all to their owners generally don't get multiple trips to the unfenced expanses found at the sporting fields.

Plus, owners actually have to be there with their dogs- unlike at the "dog park" where, despite signs saying dogs must be accompanied, many people appear to drop their dog off in the fence, then return to their car where it is warm and dry. Or else they end up on their cell phone totally ignoring their dogs. That kind of thing doesn't seem to happen in an unfenced area, or at least, is much more rare.

When I ask my dogs if they want to go to the park, they know that this is where I mean. Pallo starts getting anxious and excited and emits a rather high pitched shrill noise from about 10 blocks away when he realizes where we are headed. Koira starts shaking, but in her excited way, rather than her scared way.

All of this, partly just to say a simple thing. Dog parks are not the solution to dog owners wanting to enjoy time spent outdoors in public with their dogs. Many people enjoy taking their dogs to dog parks. But keeping open off leash dog friendly areas like the sporting fields open to people to enjoy with their dogs is important. It helps create a much more relaxed environment for dogs to interact, while giving the humans something to enjoy and do as well (which is mostly completely lacking at the "dog park").

Get out and vote! 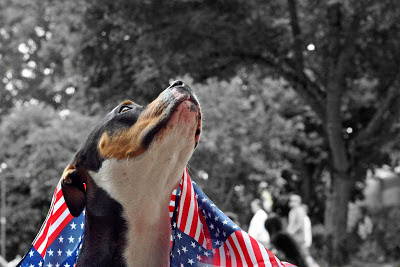 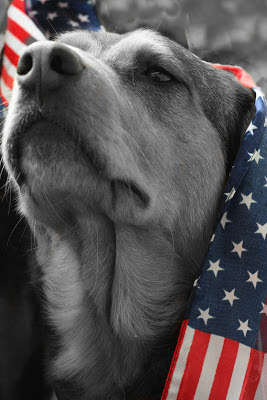 A bit of fun

Wednesday night I took the dogs up to Salem to My Dog's Gym. We practice flyball there every Thursday night, and every year they have a Halloween party, and we go. My goal this year was to win the costume contest, but there was a lot of fun stuff going on there as well.

I played around with the dogs some. Before too many people got there, I spent some time trying to teach Koira to "strut" and she was doing really well. I was getting 3-4 steps of strutting by the time we stopped. Since we had never tried it before, I thought that was pretty good for a first session, especially with all the craziness around us of other dogs, people arriving, etc.

As the party got started more, I switched out dogs and brought Pallo in. I ended up having him on the other end of the leash when they announced we were going to play Musical Chairs. The dog version is to do musical platforms, with each dog needing to stop on a platform (be it whole body, 2 feet, or even just one foot) whenever the music stopped. I've never done platform work with Pallo before.

We did a few warm up rounds of walking around during the music, then stopping on a platform when the music stopped. There were plenty of platforms for everyone who wanted to play, so that we could get the idea of it. Pallo figured out pretty quickly that being on the platform got him treats (though at first he thought he needed to be on the platform, laying down, and being "ashamed"). Turns out there is a big edge toward winning when your dog is super gung-ho on jumping up onto any platform within leash reach. We managed to take the game in the end, after a really fun time playing with a ton of other people and dogs. Pallo really won it for us, as in the last one, with two dogs and one platform, all I had to do was get him headed toward the platform and he simply bolted up onto it.

After the game was over, I got Koira back out and costumed up both the dogs. There were some other really great costumes as well, with one owner-and-dog pair dressed up as flying monkeys, a few dressed as pumpkins, and some other great ones. But, me, Koira, and Pallo ended up taking the Best Overall prize (there was also Scariest, Cutest, and Best Duo). No pictures, though, because I was a bad blogger and forgot my camera...

Hope everyone else had a great Halloween with lots of fun. And that your November starts off amazing. And good luck to everyone participating in NaNoWriMo this year! I totally forgot it was coming up, so when I remembered yesterday, I registered and got something started, but I have zero confidence of getting it finished with no planning, no solid ideas, and a really busy schedule ahead of me.
5 comments: