Went to practice tonight, and Koira ran great. No crossing over, not even any looking over. She ran fast, single striding almost the whole time, down and back, held her ball all the way back to me, and was even releasing her tug easily to get ready for her next run. She is looking a lot faster now, and I'm looking forward to seeing what her times are like at the tournament next weekend. She ran with her new coursing slip (pink and purple) and also tried out her new flyball collar, which has a handle and is padded with home-done felting. I also made some skid boots for her and ran her with them tonight, and with as much wear as I see on the leather from just practice, I think the boots are something she really needs. 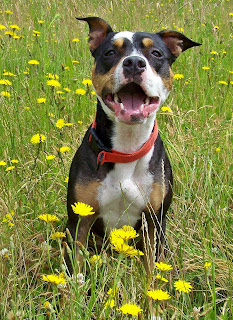 Pallo ran okay, but with some major ball dropping for no reason I could see. He was even dropping his ball before crossing jump 8, which is way worse than his normal right-on-the-line drops. Didn't need to potty, didn't seem overly tired. Not sure what his issue was. I might need to go back to his teeny tiny tug toys instead of a full length tug with him, because I can't really think of what else to do. Why do problems always appear or get worse right before tournaments? 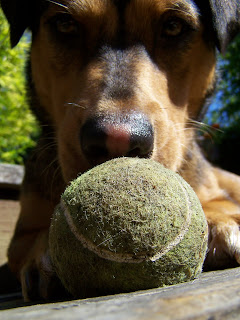 On the plus side, Pallo is doing very good with his conformation practice. I brought him in during our baby dog class tonight and had a few team members help out with mock-measuring him. He was tense but for the most part did good. He moved his head a bit too much for me, and did his leaning-away from the measuring person thing once, which was annoying but better than normal. And, at least on the home made wicket we used, he measured at 13.5 inches, which means he would jump 8" instead of the 9" he normally measures at. This is my goal with him, because I have been pretty sure for a long time that if he just relaxes while being measured, we can get that good, low measurement. As our conformation instructor reminded me, though, I need to relax about it too...