This month, we had the chance to try Ziwi Good Dog Rewards Air Dried Venison Dog Treats. These treats are made from New Zealand Venison, and have additional ingredients like green mussel. They aren't freeze dried, so aren't crumbly. They are easy to break into smaller pieces for training. 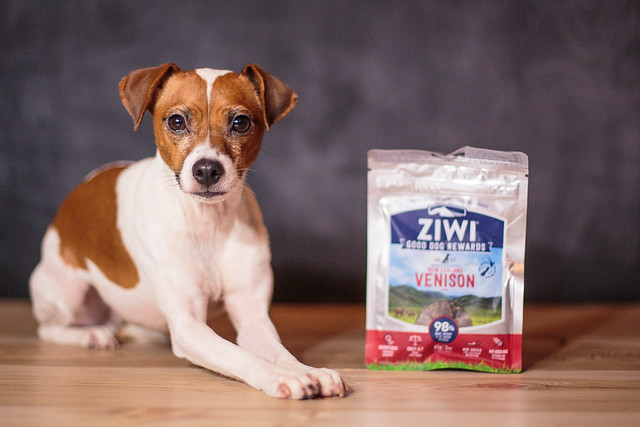 With great ingredients, it is no surprise that the dogs absolutely love these. Actually, the cat is pretty interested in them too. At around $10 for a 3 oz bag, they aren't super cheap, but you get a surprising number of treats in the bag for that. I would be happy to buy these again in the future.

We were provided with these treats in exchange for our honest review. We were not compensated in any other way, and all opinions are entirely our own.


Do you ever travel with your cat? Or set up your cat in a room/part of the house while you have visitors over? This Tidy Cats disposable litter box is perfect. It comes prefilled with clumping cat litter, and the entire box can be thrown away when no longer needed.


I've stayed in a hotel with my cat before, and it isn't the easiest thing ever to carry a litter box with you (gross if you bring the one from home, even after cleaning it completely, or you buy a new one just for the trip), plus litter. This easy-to-use litter box makes it easy and clean to transport a litter box with you on a trip. Or, it can be an easy additional litter box for your home when you add a new cat, temporarily need to seperate your cats, or set up a cat in a room different from normal due to visitors coming over.


I wouldn't hesitate to buy one of these if we travel in the future.

We were given this product for free in exchange for our review, but all opinions are entirely our own and we were not otherwise compensated.
No comments:

Crater Lake in the Snow

The day after Christmas, we headed up to Crater Lake National Park for the day. It is a long drive for a day trip, especially with icy roads in the mountains, but I have been wanting to go to Crater Lake while there is snow on the ground ever since I went in October a few years ago (gorgeous, but well before any winter weather hit that year).

Crater Lake in the winter is pretty hit and miss, with more misses than hits. The lake is often covered in clouds and mist and either fully or partially hidden. I got super lucky when I went in October a few years ago, and lucked out this year as well. The weather was clear and sunny, with just a few high wisps of clouds.

The snow was gorgeous up there. It had melted and refrozen, so had a solid layer of ice as a crust, which made it less than ideal for snowshoeing, hiking, or skiing. But with the use of snowshoes, we were able to enjoy the rim of the lake without breaking through the ice crust and stepping knee deep into the snow with every step. (There are snowshoes for rent up there if you don't own any, and there are free ranger guided snowshoe hikes all winter long as well.)

The dogs aren't actually the biggest fans of cold weather and snow. Koira tolerates it, and actually enjoys the snow a certain amount, but Ptera thinks that cold is stupid. She rode around tucked inside my coat about half the time, despite it being a balmy 38 degrees while we were there.

A few hours at the lake, then we turned around and headed home. It was a long day, especially for so little time actually spent at the lake, but still well worth it, and with only two iffy ice encounters while driving (one being turning around in the parking lot, where we watched a few other people have issues as well).

Dogs are only allowed in the parking lot and the viewing areas right near there, so it isn't an ideal destination for traveling with dogs. But it was warm enough that we went ahead and brought them and just bundled them up in their crates in the car when we went places they couldn't go, and they stayed plenty warm. Overall, with or without dogs, Crater Lake is certainly worth visiting.
4 comments:

Twas the Night Before Christmas

Hope you have a great Christmas Eve today.


I'm sure the artist isn't taking any more orders for delivery before Christmas this year (her work is amazing, and painting takes time), but I think she has gift certificates available if you are still looking for the perfect present for someone. I paid full price for these ones to be done, and would happily pay again. I am sharing her work only because it is amazing, and works so perfectly paired with the ribbons my dogs and I have worked so hard to earn.

One last thing, if you are ever the one in charge of ordering ribbons for a dog event, choose bridle hooks on the rosettes, instead of cord. The bridle hooks make the ribbons easier to hang, and easy to hook to the dog's collar for a ribbon photo. Bridle hooks all the way!

Email ThisBlogThis!Share to TwitterShare to FacebookShare to Pinterest
Labels: ribbons

Koira turned 10 years old today. The weather is freezing cold but clear today. We probably should have taken advantage of the sun shining with a hike, but instead, we snuggled up inside with a flannel comforter and a roaring fire and enjoyed some movies.

Last weekend, Koira raced in Multibreed with the Portland TailBlazers and earned her Flyball Master Excellent (10,000 points) and Multibreed Dog Champion (500 multibreed points) titles. She is going to mostly retire from flyball at this point, though she may come out to play a time or two over the next year if she is feeling good, and race one more time next year (again, if she is feeling good) to try to earn her Iron Dog.

She was a really good girl, and did her job great. She had a really good time too. I think she would be perfectly happy without the long car rides to and from Canada, though.

We happened to be getting Christmas photos done by a photographer at the tournament, and she took a picture of Koira with her fancy new FMX ribbon while we were there as well.
2 comments: