Every year, I make Christmas candy. Normally, we will do a candy making party with family and a few friends, then I will make some other candies to supplement those from the big party. One candy always on the list to make is toffee. 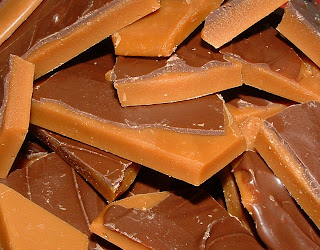 Our family loves toffee, be it plain, covered in chocolate, or with chocolate and nuts. And, our toffee recipe is so super simple, it is easy to make a ton of it. Or, at least it was. Because for some reason, this year's toffee is a fail. Out of six attempted batches, only two turned out.

Its been suggested to me on a food forum I frequent that the recipe itself is at fault. Being a super simple recipe of one cup sugar, one cup butter, stir over medium-high heat until it smells burnt, then pour on a cookie sheet to cool, some people claim that the basic needs for creating toffee aren't fulfilled. But, this self same recipe has worked for my family for years- all of my life, and likely all of my mom's life as well, if not her mom's too! Somehow, I think the defect lies somewhere other than the recipe.

The thing I am finding most suspicious is the butter. The first two batches are the two that turned out and used fresh from the store butter. The next two used the same brand of butter, but it had been previously frozen. Instead of turning into awesome candy, those batches separated into an oily butter liquid and a brownish syrup that would not stir together, no matter what. So I went on, bought some new butter, and figured I would try again. But, I forgot the butter in the car overnight. Our temperatures over night have been in the 28-30 degree range, which means, perhaps, the butter may have frozen. But certainly not frozen solid like it would have in the freezer. But still, it was another failed attempt where the candy separated out.


So my question is, what's wrong with it? Does freezing butter cause a chemical change significant enough to cause this failure? Does the freezing process add moisture to the butter, causing the failure? Was the second time around a failure due to the butter freezing, or due to using store-brand butter, which may have had higher water content?

I guess I get to make rice crispy treats as holiday candy this year...