Today, I took off for the mountains with the dogs and my mom. She is taking off to warmer climates soon and we decided to take a trip to the snow before she leaves to celebrate my birthday, since she will be gone for it.

My mom packed up the car with the cross country skis, the snowshoes, and a sled, picked up me and the dogs, and then we headed into the mountains to look for some snow. We figured we would choose our sport based on the conditions we found up there- lots off loose snow for snowshoeing, nice hills for sledding, or moderate snow with little/no hills for cross country skiing. It was a relatively last minute decision on my part to take along the gang lines, waist belt, and harnesses for the dogs. But I ended up being so glad I did! 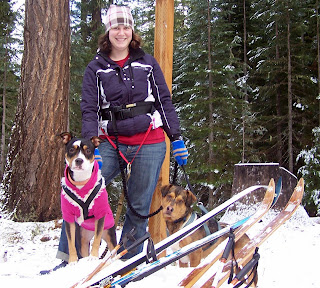 The snow wasn't deep enough for snow shoeing and we didn't find any good slopes for sledding, but it was great condition for cross country skiing. And, I figured why not, might as well hook the dogs up and see how they go.

* ETA: This is the first time I have ever taken the dogs skijoring. 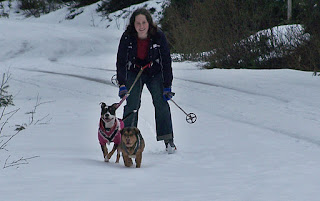 Me and my mom actually started off taking one dog each. Both dogs were a little hesitant about the whole thing, Pallo a little more so than Koira. We did a short little run like that, then realized we had forgotten the water bottle at the car, and the spare batteries for the camera, so we headed back. At that point, I hooked up with both dogs. They seemed to settle in to pulling really easily, happily leaning into their harnesses. 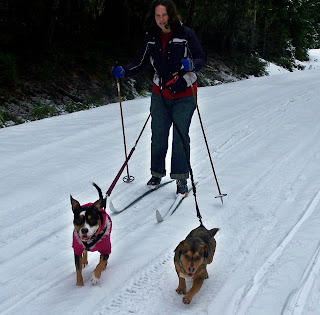 Of course, being only a moderate skier at best, it did get a bit interesting at times (like when the squirrel took off across the trail right in front of us). My back up plan for anything going seriously wrong was to simply sit down- even together, my dogs don't have the power to pull me along for very far if I don't want to go. But luckily for me (and rather surprisingly), both dogs worked their commands really well. Koira has some gee/haw training which helped a little, but most useful were the "whoa" (come to a stop) and "easy" (go slow, don't pull too hard) commands. Koira stopped great every time with the "whoa" except the squirrel, though she did stop after a few seconds even then. And of course, their "let's go" worked wonders to get them started off and encourage more speed once going. 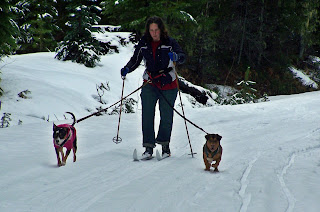 After a while on the main trail (which was actually just the snow covered road), we decided to venture off to the side when we saw some old ski tracks leading into the woods. It was harder in there, and Pallo especially became pretty distracted, but overall it was a lot of fun to go true cross country. 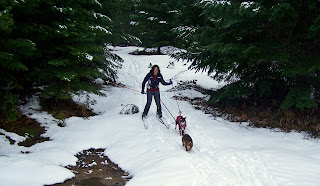 At the end of the day, we spent over two hours in skis. Skijoring was so much easier on me than cross country skiing minus the dogs, and way more fun as well. I had a total blast, only fell once all day (which has to be a record for me on skis), and I plan to get back out there again as much as possible this winter.