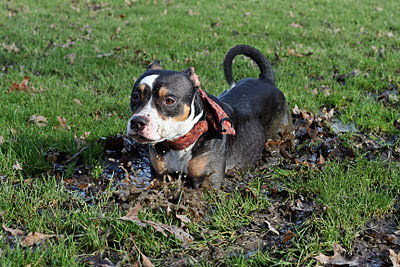 With Koira's leg feeling better this past week, I have been slowly allowing her more activity. We are biking (at a slow trotting pace for her) about 10 minutes per day. She has been enjoying the activity I think, but it still isn't nearly enough to make a dent in all her pent up energy.

Today I went down to Goodwill to pick up some stuff, and took Koira into the store with me (the local Goodwill always allows dogs, but I double check every time I go there, asking before bringing her in). After a mentally exciting store adventure, I decided it would be safe for the dogs to go to the park for a few minutes. Both pups enjoyed themselves a lot, running around in the mud and sun. Koira had to have a thorough mud bath before we went home.

And, for those who have been asking about the breeds of my dogs- Want to have a go at guessing? Koira is the easy one, though her coloring throws people off often enough. Pallo, however, is like some kind of party game to try to guess his breed. Someday, I will send off to have him DNA tested. Until that day, your guess is as good as mine!