I ended up heading to Portland for the Coast to Coast Bully Walk put on by the Portland Pit Bull Project. I set up Koira with the new GoPro harness I made for her yesterday (which I'll share with you later). I was hoping for some good pictures, since it was raining too hard for me to have my camera out.

Unfortunately we seem to be having some technical problems with the camera. I'm wondering if I messed up some settings somehow, because I would hope that being outside at noon would be enough light to take clear pictures from the speed of a walking dog, even when cloudy. Apparently not.

In any case, we had a lot of fun doing the Bully Walk. There were pups of all sizes there, from littler than Koira all the way up to 100+ pounds. A number of people asked what was happening, which was a great opportunity to spread the word about Pit Bull Awareness Day and a great time for our dogs to be breed ambassadors.

There was also a costume contest after the walk was over. Unfortunately it started to rain pretty hard, so people were already taking off. Koira had her first chance to wear the AWESOME costume I made for her this year. She came in second place in the contest, and won a nice warm coat. 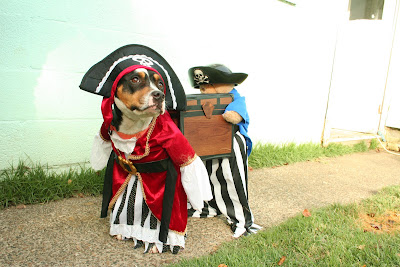 It wasn't a huge deal, but it was a lot of fun. I hope similar events around the country and around the world will help people see pit bulls for what they are: just another breed of dog, and a wonderful companion to share your home and your life with.