Anyone seen the movie Meet the Robinsons? Remember this part?

That's what I keep thinking of. You know why? Because I went out and adopted myself a Munchkin.

That's right, the household has grown by one. For those unfamiliar with cat breeds, a Munchkin is basically a dwarfed cat- a full size cat with abnormally short legs. Like, the corgi of the cat world. Now, my little guy isn't a purebred Munchkin. He may be related to one, or he may simply be a random cat with a genetic mutation causing dwarfism. But, his short little legs are pretty darn adorable. 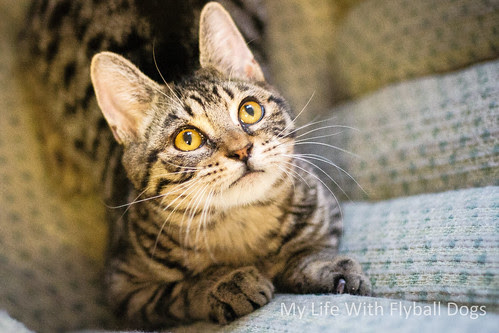 I don't think he has quite as short of legs as a standard show cat would have. But they are shorter than a normal tabby cat should have.  And he has these gorgeous orangey green eyes. 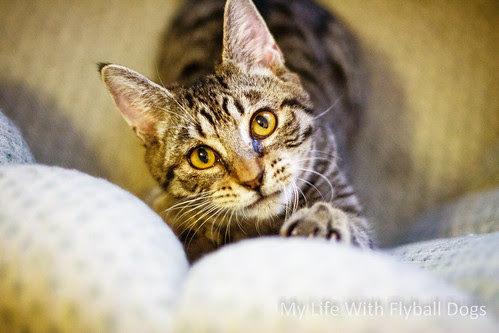 At six months old, he is probably going to still get larger (though his legs are probably not going to grow more). He is cuddly, but happy to play alone, and non demanding. He is playful, but careful with his claws. He isn't afraid of the dogs, though he will tell them to back off if they get a little too enthusiastic (Koira). Pallo is actually afraid of him for the most part. I'm sure they will become good buddies though. Koira is fascinated  and spends a lot of time just laying down, watching this new ball of fur play around and explore. 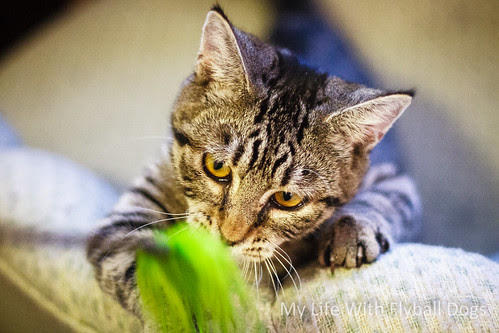 You know what the real problem with him is? He doesn't have a name! This little guy needs an awesome name to get him to fit in with the crew here. So far, my naming scheme has been Finnish words for dog names, and Bible names for the cats. Martha came with her name, and then my second cat was Lazarus. Laz went to live with some friends of mine, however, because he was needy and desperate for attention all the time. Since my friends have 6+ people living in the house, he gets gobs of attention over there, all the time, and I still get to visit him whenever I want. 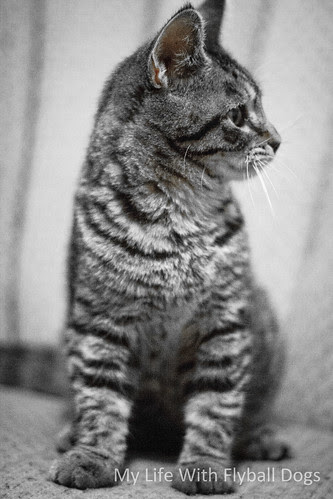 I'm not sure if I want to continue the naming themes with this new guy, or just give him an awesome name that suits his funky, friendly, easy going, short legged self. Which is where you guys come in. Will you suggest a name for this new little guy? Be it a long mouthful of a name with a cute nickname to use in the mean time, or just the perfect one syllable name, I would love to hear your suggestions.

Just to throw a little extra fun and jazz into the naming suggestions, how about a prize? Leave a suggestion for a name, and use the Rafflecopter to enter into a drawing for a fun prize. I'll leave it open until Thursday evening, and then post a survey of my favorite names for everyone to vote on. Rafflecopter will randomly select a winner, who will then be sent a nifty prize (US only).