A Walk At The Park 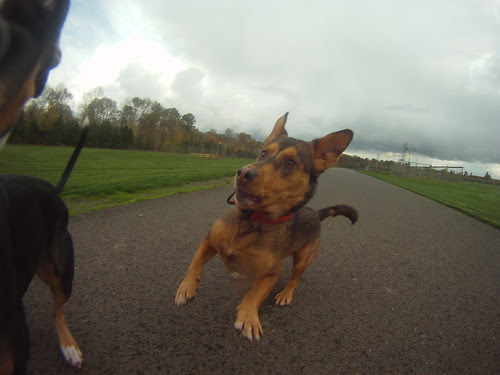 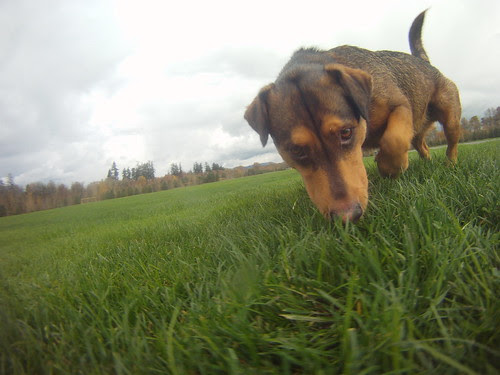 This park shouldn't be mistaken for a "dog park" though. Instead, it is simply a park for people to go and enjoy themselves, which happens to allow you to have your dog off leash. 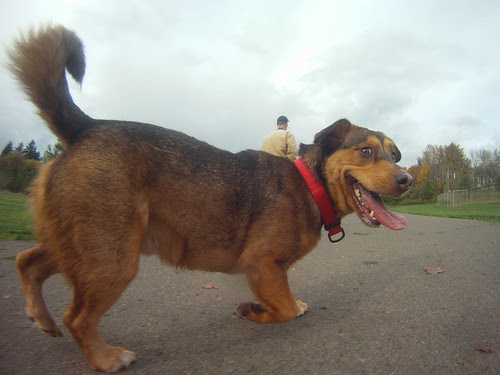 We do have a "dog park" in town. It is a tiny little fenced area with one big tree, a few benches, and lots of mud. I don't go there. My dogs have been attacked in that park multiple times. And, my dogs don't really want to go explore such a small place when I am standing around. If I wanted to stand outside with my dogs and play fetch, I'd do it in the back yard. 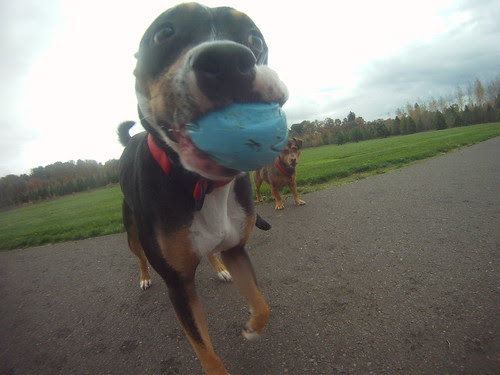 The great thing about the sporting fields allowing dogs off leash is the size of the park. Unlike in the small fenced park, the dogs love going off and exploring here. Since I am walking along a path or trail, the dogs get a chance to wander around, go sniff, play, and stay constantly engaged without me having to carry a ball or disc around to play with them (though of course many people do bring toys). 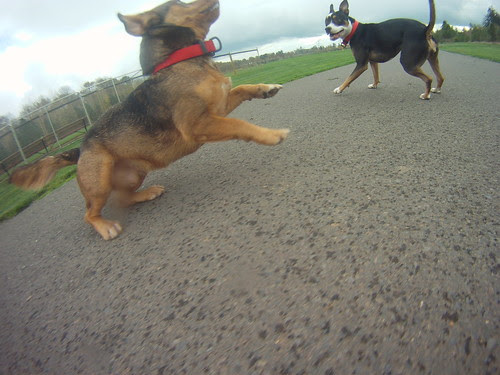 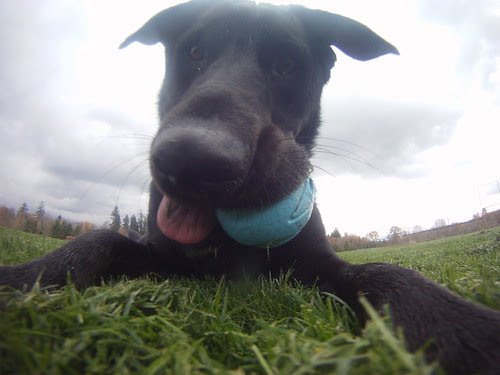 If any other off leash dogs are around (and we generally see at least a few, and sometimes a lot), my dogs get the chance to say hi. Since dogs are off leash at this park, few tend to be dog reactive. If we ever run into a dog who doesn't like my guys, or who my dogs don't care for, we can simply keep walking. It is amazing how easily deflated situations can be by simply speeding up a bit, continuing down the path, and calling the dogs. 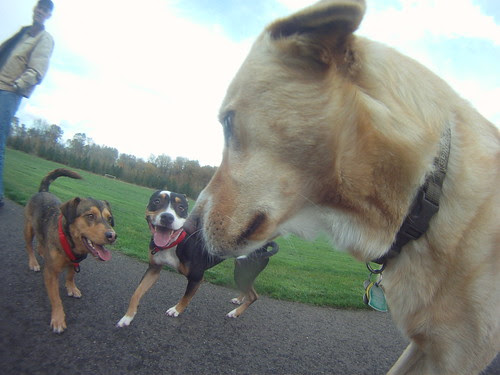 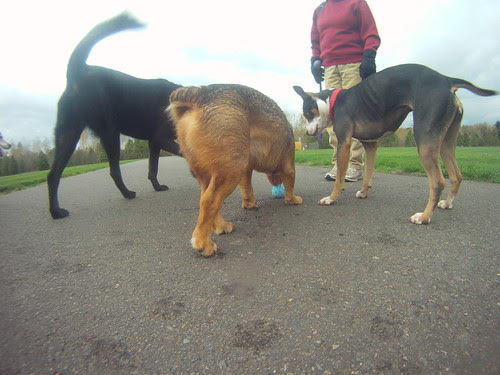 Since the sporting fields aren't fenced, I think people who do bring their dogs off leash there have better control over their dogs than those going to the "dog park". Dogs who listen not at all to their owners generally don't get multiple trips to the unfenced expanses found at the sporting fields. 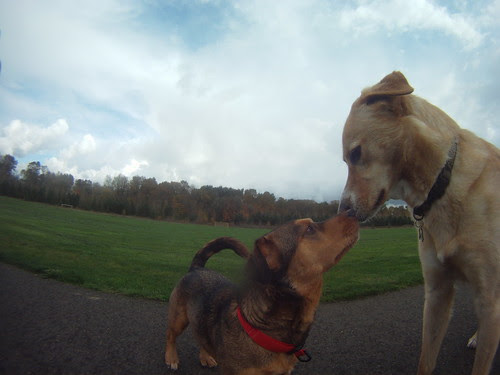 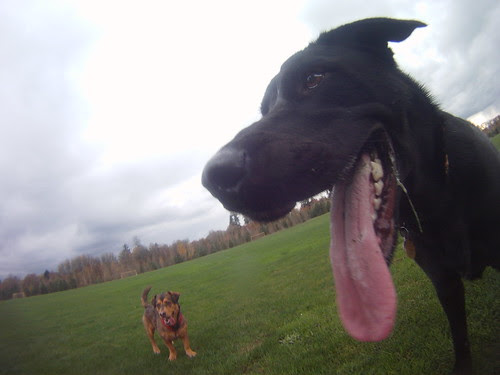 Plus, owners actually have to be there with their dogs- unlike at the "dog park" where, despite signs saying dogs must be accompanied, many people appear to drop their dog off in the fence, then return to their car where it is warm and dry. Or else they end up on their cell phone totally ignoring their dogs. That kind of thing doesn't seem to happen in an unfenced area, or at least, is much more rare. 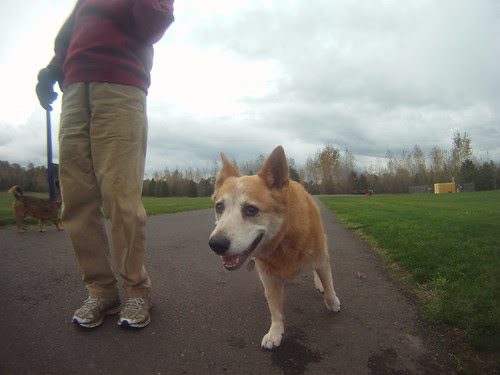 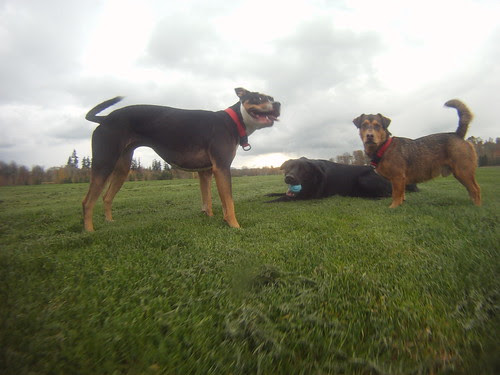 When I ask my dogs if they want to go to the park, they know that this is where I mean. Pallo starts getting anxious and excited and emits a rather high pitched shrill noise from about 10 blocks away when he realizes where we are headed. Koira starts shaking, but in her excited way, rather than her scared way. 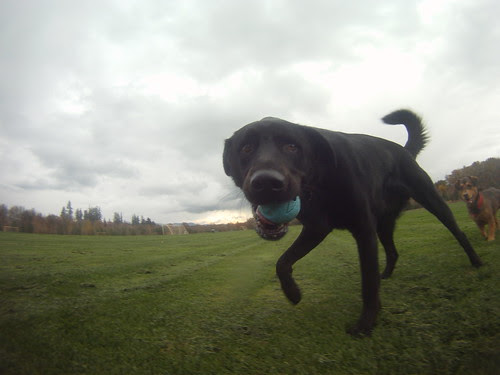 All of this, partly just to say a simple thing. Dog parks are not the solution to dog owners wanting to enjoy time spent outdoors in public with their dogs. Many people enjoy taking their dogs to dog parks. But keeping open off leash dog friendly areas like the sporting fields open to people to enjoy with their dogs is important. It helps create a much more relaxed environment for dogs to interact, while giving the humans something to enjoy and do as well (which is mostly completely lacking at the "dog park"). 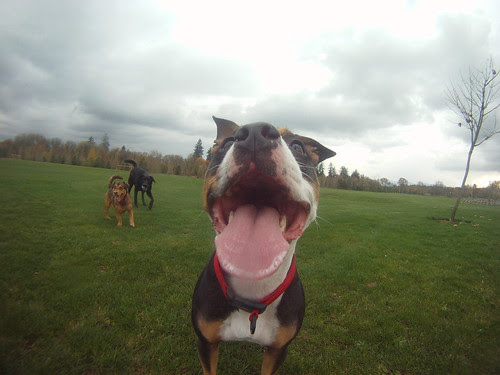