As I read the comments on Wednesday's post, I had a bit of an incredulous feeling going on. Not because people liked the pictures, because frankly, they are some of my favorite in a long time. Mostly, it was the people commenting on how awesome Pallo posed, and how he must be such a "natural poser" for all those pictures.

Little do you guys know, I guess. Pallo was a terror to try to photograph at first. The only picture I had of him for a while was the (very unflattering) picture from the Linn County Dog Control's website where I first found him. After Pallo was part of my family for a few weeks, I managed to snap this picture of him on my phone. This was after being at the park for (quite literally) three hours of play time. I used a ball to get his attention. 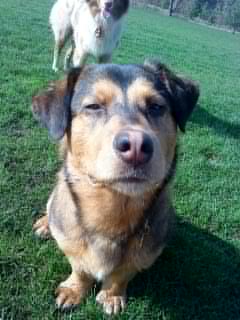 Pallo's first trip to the beach is documented only in this photo: 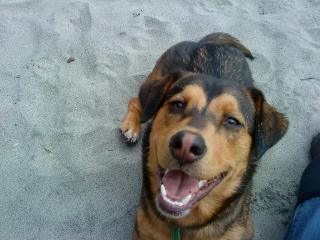 A few other early-days pictures of Pallo are the following. Keep in mind that these photos were selected as the best photos of the day. These aren't the outtakes. 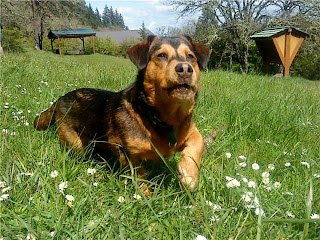 Now, part of this was my own photography skills. But, I have to say, that was only part of it. I have certainly improved with the camera in the past two years. However, I was taking perfectly decent pictures of Koira already. The biggest difference between the above photos and my new personal favorite of Pallo is in the training we have done.

Yes, there is a big difference as well in the quality of the camera (especially given that in the early days, the only camera I had was my phone). But, even with the camera I have now, I would not have been able to get this picture of Pallo at the beginning.

So, I thought I would share. Not the camera-specifics of how to take a good dog picture. Lots of people have done posts like that. I enjoy reading them. I may write one someday when I feel qualified to do so. But, I think perhaps more helpful, is the post I want to do.

How to train your dog to pose for the camera.

1: Exercise your dog.
Take your dog out for a run, a game of ball, or any other activity that will tire him out. A high energy dog will not be willing to sit still for happy photos (at least not without more training) until he has had a chance to run off some of the energy. Bonus: A tired dog often is panting in photos, which gives the impression of "smiling" for the camera.

2: Make sure you have plenty of time.
Don't expect to snap off a few pictures in a minute or two and come up with that perfect picture. You will need to spend time working with your dog and taking plenty of bad pictures to get those good ones. When I do a photo session, I will take over a hundred pictures of my dogs, easily (some days I end up with 800+ photos just from that day). Also, make sure you have plenty of space on your memory card and plenty of battery life on your camera, so that those technical aspects won't get in the way.

3: Get your dog used to the camera
Many dogs are "camera shy", or their people think they are, because the dog takes off whenever the camera comes out. For many dogs, this is a side effect of being told to stay whenever the camera comes out, then having their person upset at them for moving (as often our dogs' stays are not proofed against us moving around, putting a box in front of our faces, and making clicking and vrring noises). Some dogs are really just unsure of the camera being in front of their person's face.

Both of these problems can be worked on by bringing your camera with you. Take your camera out, but don't put it to your face or take pictures at first. Depending on how shy of the camera your dog is, you may want to pair treats with the camera coming out. Others may just want to play fetch with their dogs, first concentrating on the camera being visible, then on actually raising the camera to your face and taking pictures, but with a focus on the dog's continued happy reactions, ignoring the potential quality of the pictures. You just want your dog to get used to seeing the camera in front of your face and getting used to the sounds of the zoom, focus, and shutter. You can even use the shutter sound as a "clicker" and pair it with treats, giving one up every time you take a picture. (I don't treat for every click of the camera, but it may be a method useful for getting started.) Also, shooting "from the hip" can be a good way to acclimate your dog to the sound of the camera without having it cover your face, and can give you some interesting results sometimes.

4. Train a "wait"
A formal stay is less useful in pet photography than you might think. I prefer to train my dogs to "wait" which for them means they are free to shift position but have to stay in the same area. They can also be released from a wait when I am away from them, while their "stay" must be held until I return to them. The word you use doesn't matter as long as you are clear to your dog what the criteria are. Remember to practice your "wait" or "stay" with your camera. Proof it with the camera in front of your face or with you moving around, as you will want to back up, kneel down, or even lay down, to get a good picture sometimes.

It can help to place your dog up on something, such as a log or a chair, to define the space he is to "wait" in. Using a crate mat as a "wait" space also works, but may not be what you want to always have in pictures.

5. Learn your dog's happy words
Figure out a way to make your dog look at the camera without saying their name. Using the dog's name can confuse them into thinking you want them to come, as that is most often what is wanted. Instead, try using words to perk your dog's ears up. Koira perks her ears and looks around when I ask her "do you see it?" which gives a great gazing-into-the-distance look. When I want a straight into the camera look, with or without a head tilt, I want the ears up and a happy look. I will ask a few questions such as "do you want some breakfast?" or "do you want to go to the park?" which both include words my dogs know and are phrases associated with actually doing those things.

It may take some experimenting to figure out which words will make a pretty picture, which will gain no response, and which will amp your dog up so much that he takes of running and looking wildly around.

6. Stay happy, and leave the frustrations at home
You need to have fun while taking pictures so that your dog believes this is a fun thing to do. If you get frustrated with him getting up and moving, or not looking, etc, take a break and play for a while. Remember to release your dog from his position if you need to do something like change your camera lens or move around a lot so that he doesn't get too stressed having to wait. Remember to praise your dog. Use your voice, treats, or toys in between taking pictures so that your dog is sure this is a fun thing to do. In general, don't try to train and photograph at the same time, and if you do, place the emphasis on the training. It is better to have consistent training than good pictures, because you can always try for that picture again next time.

Happy Shooting!
I hope these tips help out some of you who have trouble getting a good picture of your pups. I really think the number one thing to remember is to have fun, because as long as you are having fun, your pup will have fun as well. And once picture taking is a pleasure for both of you, you will both be wanting to do it more.

For some more animal photo tips, check out Honey The Great Dane's latest post on this same topic!